To share your memory on the wall of Neal Whiting, sign in using one of the following options:

Provide comfort for the family of Neal Whiting with a meaningful gesture of sympathy.

Neal passed away at Dulcina Hospice at the age of 91, following a brief illness.

Neal passed away at Dulcina Hospice at the age of 91, following a brief illness.

Neal grew up on the family farm in Pleasantdale, Saskatchewan. He joined the air force at age 18, and was honourably released two years later. In 1949, Neal married Glenys Robb, and together they had three children, Cliff, Glynis, and Sanders. Neal attended St. Stephen’s college in Edmonton for four years, and left to pursue a career in business. He and Glenys divorced in 1963, and in 1966 Neal remarried to Doreen Lockard. He returned to university in 1968 to earn his master’s degree in education, and taught business education in senior high for 18 years, taking early retirement at age sixty. He and Doreen divorced in 1982. Neal later met Vivian at square dancing, and they married in December 1983. He returned to ministry, and was a lay minister in the United Church until 2000. Neal lived a full life, and was profoundly grateful for everything. He taught us to not take things too seriously, and to appreciate the simple things in life. Like ice cream. Neal loved singing, dancing, and spending time with family and friends. He was highly intelligent, and enjoyed engaging in meaningful conversation with people of all ages, and from all walks of life. Neal saw God in all living things, and appreciated the beauty and wonder of nature. Neal and Vivian travelled to Maui, which was one of the highlights in Neal’s life. He always marvelled that he never thought when he was a boy on the farm, that he would ever go to Hawaii. Together with Vivian, Neal also enjoyed travelling across our beautiful country, and especially enjoyed the west coast. Neal is predeceased by his sister Ferleth, and brothers Lorne and Keith.

Neal’s family would like to thank the staff of Dulcina Hospice and of Unit 81, Foothills Hospital, especially Dr. Osei-Tutu, for his compassion and care.

Receive notifications about information and event scheduling for Neal

We encourage you to share your most beloved memories of Neal here, so that the family and other loved ones can always see it. You can upload cherished photographs, or share your favorite stories, and can even comment on those shared by others.

Posted Jun 05, 2019 at 08:49pm
Neal officiated Dave and my union. I especially remember his openness and appreciation to my requests (such as not saying ‘Dave, you may kiss your bride’, but rather ‘Dave and Shari, you may seal your vows with a kiss’). He was always one for great conversations and, when visiting ‘home’, I always appreciated his teachings at Church. Thankful for his leadership and contribution to community.

Posted May 30, 2019 at 10:58pm
Dear Uncle Neal. You always made me feel welcome and special. You took time to visit my Dad when he was suffering from memory loss and made his days brighter. I remember the time you and Viv visited us at our home. Cliff , Amour and Micheal and family and Glyn and Ken joined us as well, and We all played a strange game based on Pictionary but much more hilarious. What a great sport! I appreciated your good humour and your compassion and open minded acceptance of others.

We were saddened to learn of Uncle Neal’s passing. I remember with with already smile and great kindness. He was an easy person to talk to and he was very interested in listening to what others had to say. My last memory of a visit was at Glyn and Ken’s in Port Moody...he looked younger than his years and welcomed me as his niece with open arms! Your legacy is your family and you can be so proud of the wonderful individuals they have become. We celebrate you and the gifts you shared with others Love Keith, Sarah, Lindsey, Darren and Kelly ( Lilian & Dacs) and Krista & Andrew( Michael & Ayla)
HS

Flowers were purchased for the family of Neal Whiting. Send Flowers 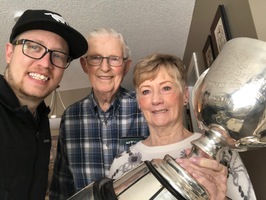 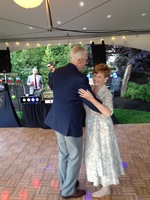 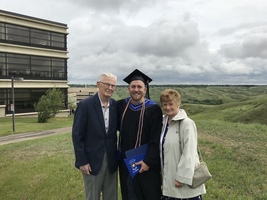