To share your memory on the wall of John "Scott" Craig, sign in using one of the following options:

Provide comfort for the family of John "Scott" Craig with a meaningful gesture of sympathy.

It is with heavy hearts that we announce the passing of John “Scott” Craig at the age of 70 years. Scott was predeceased by his parents Earle and Winnifred (nee Scott) Cra... Read More
Craig, John “Scott”
October 6 1948 – June 4 2019

It is with heavy hearts that we announce the passing of John “Scott” Craig at the age of 70 years. Scott was predeceased by his parents Earle and Winnifred (nee Scott) Craig, brother in laws Charlie Payne and Gordon Ellis, sister in law Marg Payne and his son in law Todd Knowles. Scott will be dearly missed and lovingly remembered by his soulmate and loving wife of 48 years Elizabeth (nee Payne). He will be fondly cherished as a loving father and “Papa” to Merrill Knowles, Alana (Kevin) Grant and Grandsons Ryan, Tyler, Logan, Cole and Dylan. He will be missed by dear family friend Patrick Walsh. Scott is also survived by his sister Judy (Dave) Cumming, sister in law Norma Ellis, brother in law Gordon “Buzz” Payne (Agnes), Gail Payne, sister in law Norma Ellis, and numerous nieces and nephews who Scott held dear.

Scott was born in Bathurst NB and became a heavy equipment mechanic out of school. He used that knowledge to later teach at the New Brunswick Community College in Bathurst. Scott and his family moved west in 1979 for him to attend SAIT in the Hotel and Restaurant management program. Scott’s work in the restaurant industry moved him from Calgary AB, to Red Deer AB and eventually Edmonton AB. Through a school friend Scott made the transition into the oil patch in 1983, where he became a factory sales rep with Arrow Engine Company for 20 years. After a short retirement Scott and Elizabeth started a concession trailer that catered to rodeos, fairs, auctions and other country events in southern Alberta.

One of Scott’s biggest passions in life was automotive racing. Scott’s interest in racing started at 15 years old and led him through racing at several tracks in the Bathurst area in his younger years. Scott and Elizabeth’s first real date was at a race car banquet. Scott’s passion was reignited when his oldest daughter told him she wanted to race after spending family nights at Calmar Raceway. Scott eventually made the transition back into the driver’s seat and spent the next 12 years racing stock cars and IMCA Modifieds in Alberta,
Saskatchewan, BC and Montana. Scott was an accomplished competitor at the track but also a valued member of the racing community where he had many friends. He was very pleased to once again get actively involved in the racing community helping his Grandsons who continued on with the racing genes.

Scott and Elizabeth had happily spent the last 15 years as fulltime RV’rs together, where their gypsy spirit took them to Florida, Arizona, Texas, day trips to Mexico and many places in between for the winter months. Scott was a well liked friend in their RV’ing community where all the skills he had acquired in his life were put to use cooking, repairing just about anything and making jewelry to sell at the flea markets.
The family would like to thank the medical staff at Casper Medical Center and Foothills Medical Center CVICU for their compassion and care.

At Scott’s request no Memorial services will be held. The family is grateful for all the kind words of condolence and memories.

Donations may be made directly to the Heart and Stroke Foundation, the Canadian Cancer Society, or The GoFundMe for the Roy Ross Memorial Race.

Receive notifications about information and event scheduling for John "Scott"

We encourage you to share your most beloved memories of John "Scott" here, so that the family and other loved ones can always see it. You can upload cherished photographs, or share your favorite stories, and can even comment on those shared by others.

Plant a Tree in Memory of John "Scott"
Plant a tree 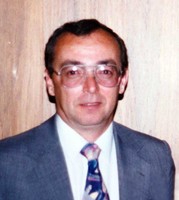