To share your memory on the wall of Barry Marshall, sign in using one of the following options:

It is with sad hearts that we announce the passing of John Barry Marshall. Barry had many health issues over the past several years. Due to complications of diabetes, Barry ... Read More
Barry Marshall
September 25th, 1951 - September 9th, 2019

It is with sad hearts that we announce the passing of John Barry Marshall. Barry had many health issues over the past several years. Due to complications of diabetes, Barry spent the last 5 years on dialysis, had lots of heart problems and was bound to a wheel chair. Too many health problems for one person to take. Barry’s heart finally gave out in the wee hours of September 9th, 2019 in the Cardiac Intensive Care Unit at the Foothills Hospital. He was 67 years old, 16 days prior to his 68th birthday.

Barry was born in Winnipeg, MB, but lived most of his life on the mainland of British Columbia where he was a corrections officer at Oakalla Prison in the 70’s. He was the animal control officer for the city of Chilliwack, BC in the early 80’s. After that he worked in several areas of real estate sales and security. He finally settled in Calgary, AB seven years ago. He was a lover of dogs, and would never drink anything but a short dark at Starbucks.

Barry was a quiet, caring and private soul with a witty sense of humour and a quick tongue. We will all miss his many insults, which we know were delivered with love.

A Celebration of Life for Barry, along with his daughter Cari, will be held on Saturday, October 19, 2019 at 1:00 pm at the home of Barry’s sister Brenda Mackay.

Receive notifications about information and event scheduling for Barry Marshall

We encourage you to share your most beloved memories of Barry Marshall here, so that the family and other loved ones can always see it. You can upload cherished photographs, or share your favorite stories, and can even comment on those shared by others. 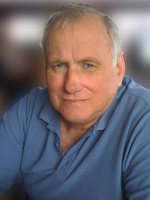