To share your memory on the wall of Henry Turbak, sign in using one of the following options:

Henry Edward Turbak of Calgary, Alberta entered into peaceful rest on Monday, June 5th, 2020, in the Foothills Hospital after a short, yet courageous, battle with Cancer.

Henry Edward Turbak of Calgary, Alberta entered into peaceful rest on Monday, June 5th, 2020, in the Foothills Hospital after a short, yet courageous, battle with Cancer.

Born in Annay Sous Lens, France on February 24, 1950 to parents Stanley and Sophie Turbak. Henry along with his parents and brother immigrated to Canada when Henry was two-years-old and settled in the town of Port Colborne, Ontario where Henry spent his transformative childhood and teen years.

An inquisitive mind from a young age, Henry would leave Port Colborne to attend Western University in London, Ontario and from there headed out west to Alberta and began working in the telecommunication industry having served in various roles with AGT, Telus, and Bell West over his 30 year career.

He was predeceased by his loving parents, Stanley and Sophie Turbak; his in-laws, Lyal and Mary Kerik; sister in-law, Lois Oliver; his nephews, Ward Weber and Wayne Johnston and nieces, Paula and Erin Dille.

An avid conversationalist who loved a good chat and could eloquently speak on any given topic, Henry was the epitome of a people person. His voracious appetite for life ensured that every day was a day for learning and discovery. Henry made the most of every single minute he was granted on this earth.

His love for his beloved Montreal Canadiens and Toronto Blue Jays was eclipsed only by his love for his grandchildren, with whom Henry was the only one able to truly match their zest for life and pure happiness.
Henry was the definition of what it meant to be a good husband and a great father, always willing to offer sage advice or lend a hand fixing something, family was always first for Henry – with a good game of cribbage coming in a close second. Henry proudly coached for both of his daughter’s competitive softball teams for many seasons in the Calgary and Edmonton areas.

Henry was also a tennis enthusiast and perhaps the only man to ever go to Mexico on vacation, only to end up bringing a tennis racket home to Canada for his daughter so that she could share in the game that meant so much to him.

A cultured man, whose curiosity in life led him around the world on various cruises and trips, Henry was always the first person to find a new friend wherever he was in this vast world.

A light that burns as bright as Henry’s can never truly be dimmed, and though he will be sadly missed by all who knew him, his love and compassion will live on in the hearts of all who had the pleasure of knowing this wonderful man.

In memory of Henry, donations may be made to the Calgary Food Bank.

Due to current COVID-19 conditions a Celebration of Henry’s Life will be at a later date. To view and share photos, condolences and memories of Henry, please visit www.choicememorial.com.
Read Less

Receive notifications about information and event scheduling for Henry

We encourage you to share your most beloved memories of Henry here, so that the family and other loved ones can always see it. You can upload cherished photographs, or share your favorite stories, and can even comment on those shared by others.

Posted Jun 23, 2020 at 08:31pm
Henry & brother John)were my 2 best friends (ever!) back when we were growing up in Port Colborne: our backyards met, and we often did silly things like sending morse code at night to each other via flashlights (at least until mum caught me!) I remember daily the 2 or 3 of us meeting in my garage at lunchtime just before school to listen to the the radio show "Chickenman' (he's everywhere - he's everywhere), and we dashed like crazy to get back to high school where we made it with seconds to spare!

I missed the boys when Henry went out west, John to Toronto, and me to McMaster, but my memories of Henry and the family are precious - best wishes to John, Irene, & the family... Gary Jonas
Comment Share
Share via:
NS

Posted Jun 20, 2020 at 11:47am
we were sorry to read of Henry's untimely passing .We had been thinking of Sofi as her green shrubs are in blossom along the yard when the morning paper listed Henry's obituary ( your neighbors norm/Sharon)
Comment Share
Share via:

I know we haven't seen you in years but I always have fond memories of "coach Henry" during our softball career. He was always positive and had such enthusiasm for us despite some games when we didn't have it for ourselves. He really supported girls team sports and activity which wasn't always the case at that time. I'm so sorry for your loss, you have so much to celebrate in his life based on what I know of him and just reading all these others posts. Our love and condolences to your family during this hard time. Allison, Will, Henry and James.
Comment Share
Share via:

Posted Jun 16, 2020 at 12:39pm
Sue and I extend our deepest thoughts on the passing of Henry. Never shy about taking on challenges, Henry was always willing to make things better for his family and friends. He truly was a family person who loved what he did, whatever he chose as his next project.
We will miss him and cherish the memories that we have of Henry, crib and the Montreal Canadiens. 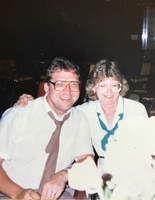 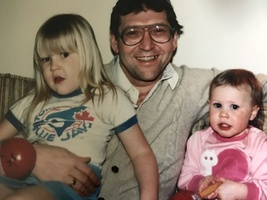