To share your memory on the wall of Harold Perry, sign in using one of the following options:

It is with profound sadness that our family share the peaceful passing of our beloved father Hal on Friday, July 31, 2020 after celebrating his 95th birthday just a few short weeks ago. Hal's favourite song was “When I Fall in Love” by Nat King Cole (1965) and he stayed true to the lyrics “it will be forever” after losing our mother and the love of his life, Terry in 2006.

Hal was born & raised in Winnipeg. He had flat feet so was denied entry into the military and instead became a telegrapher & train dispatcher for the CPR. Seventy years later, he still remembered the Morse Code. He then went on to the life insurance industry with North American Life & Casualty and Empire Life. From 1957-67 Hal was a member of the Winnipeg Blue Bomber executive in public relations and proudly saw the team win four Grey Cups. A promotion had Hal move his family to Calgary in 1972. Four years later he joined Moffat Broadcasting as Sales Manager for CHFM which at the time was the first contemporary FM station in Calgary. Hal retired in the late eighties from the radio business where he left an indelible mark on his younger colleagues. One who recently referred to him as a “character who made the world a more interesting place!” Known for his quick wit, he had an amazing array of jokes to keep you laughing. He served with Rotary International South Calgary Club and was a volunteer with the Heritage Park Historical Society where his love of Christmas was instrumental in the creation of the 12 Days of Christmas. Throughout his life, Hal was a great golfer and avid curler.

Music was a huge part of Hal’s world. He could listen to a tune and tell you the album, the song title, the artist singing and the musicians playing each instrument. Hal & Terry were great hosts and loved to throw parties where they would dance the night away to his vast array of music. Hawaii and Palm Springs were favourite travel destinations, but nothing compared to visits to Buenos Aires, Argentina and Santiago, Chile to visit Barb & her family.

In keeping with Hal’s wishes, no formal service will be held. His family will inter Hal & Terry together forever on October 7, 2020 which would be their 70th wedding anniversary and plan to celebrate with a compilation of the music that will resonate with us forever while we raise a Manhattan and a Martini in their honour.

The family graciously thanks the staff at Bethany Riverview for their loving kindness to Hal these past few years.
To view and share photos, condolences and memories of Hal, please visit www.choicememorial.com.
Read Less

Receive notifications about information and event scheduling for Harold

We encourage you to share your most beloved memories of Harold here, so that the family and other loved ones can always see it. You can upload cherished photographs, or share your favorite stories, and can even comment on those shared by others.

Posted Aug 15, 2020 at 10:53am
My sincere condolences on the passing of your Father. I made a slideshow for my parents; Dave and
Gladys Burton. It included a lot of their Stampede Breakfasts and your parents were always there. Both our parents had such a great love for music. They hung out with a terrific crowd of friends and so many wonderful parties. Blessings today and always. Margaret Burton
Comment Share
Share via:
KE

Posted Aug 10, 2020 at 10:44pm
Dear Perry Family,
So sorry to learn of Hal's passing, wonderful that you were able to have him until his 95th year. Hal and Terry were most memorable friends of my parents and I felt lucky to share in that friendship. I recall one afternoon in particular when they were over visiting and Hal was holding court in our living room. I was a teenager and I recall thinking how I'd like to have that type of relationship one day - no matter how corny the jokes Hal told Terry laughed heartily. I hope they are once again sharing lots of laughs together.
Lots of love to you all,
Kathy (McIvor) Evans and family
Comment Share
Share via:
CC

Posted Aug 08, 2020 at 04:09pm
I am sad to read of Hal's passing. I have so many fond memories of working with him at FM96 radio where he was popular
with co-workers and clients. He had a great sense of humour and was a true gentleman. My deepest sympathy to the Perry family.
Cheryl Cohen
Calgary
Comment Share
Share via:
P

Posted Aug 08, 2020 at 02:19pm
Dear Jeff, Barb & Families,
I was so sorry to read of Hal’s passing - what a truly lovely gentleman.
It was always nice to see him at Renoir - and what a remarkable life he led. Growing older isn’t for chickens and the journey wasn’t his alone...all inclusive...your love & support certainly saw him to the finish line. It doesn’t matter how old he was - he was Dad.
Sending you love & prayers at this difficult time.
Patti & Larry O’Connor
Comment Share
Share via:
MP

Wish I could say I knew my Uncle Hal better but how life flows sometimes, is strange and unfair and out of our control. 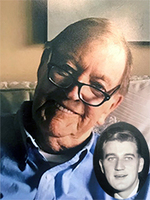