To share your memory on the wall of Gabriella Thibodeau, sign in using one of the following options:

Provide comfort for the family of Gabriella Thibodeau with a meaningful gesture of sympathy.

After a four year courageous battle with breast cancer, Gaby passed away on April 26, 2020 at age 62.

After a four year courageous battle with breast cancer, Gaby passed away on April 26, 2020 at age 62.

Gaby is survived by her husband, Allan; her three daughters, Melina, Janine and Amara; brother Robert Thomas (MJ) and her two nephews and niece.

Gaby was born on August 21, 1957, in a refugee camp in Osijek, Yugoslavia (now Croatia) as her parents fled Hungary during the Hungarian Revolution. She and her mother, Rosa, were reunited with her father, Jeno, in Montreal, where she grew up. After high school, Gaby earned her associate business degree from Katherine Gibb’s College in New York. Upon graduating, she moved to join her family who had relocated to Vancouver.

In April 1978 (42 years ago) Gaby began working for the British Columbia Steamship division of CPR where she met her future husband Allan. Allan and Gaby were married on August 27, 1983.

In 1990, Gaby resigned her position with BC Ferries to relocate to Ottawa as her husband had accepted a promotional position with the federal government which coincided with the birth of their oldest daughter. During the next 8 years, two more daughters joined the family and Gaby passionately embraced her position as a dedicated career mother. In 1997, Gaby and Allan relocated their family to Calgary where their three daughters still call home.

Gaby re-entered the workforce after an 8 year of absence during which the office environment had morphed from “typewriter to keyboard”. She spent the next 14 years working for Shell Canada, Saudi Aramco and Air Products. In 2012, Gaby resigned/retired from Air Products as Allan and Gaby again relocated to Ottawa.

In the fall of 2015, Gaby noticed something was ‘not quite right’ with her health. Although she went to several doctors and underwent several tests, it wasn’t until March 2016 after she had a bone marrow biopsy, that she was diagnosed with Stage 4 (metastatic) ER positive, PR negative, HER-2 negative breast cancer. During the following three years, Gaby was fortunate enough to be able to vacation with family and friends in Ontario, Calgary, Shuswap Lake area of BC, Florida and Mexico and take a Caribbean cruise. In December 2018, Gaby’s first cancer therapy treatment ceased working. Allan and Gaby made the decision to relocate back to Calgary in the fall of 2019 to be with their children.

As our families and friends are spread out from coast to coast, no formal Celebration of Life gathering is being planned. When and where possible, our family hopes to get together with everyone as practicable.

To view and share photos, condolences and memories of Gaby, please visit www.choicememorial.com.

Receive notifications about information and event scheduling for Gabriella

We encourage you to share your most beloved memories of Gabriella here, so that the family and other loved ones can always see it. You can upload cherished photographs, or share your favorite stories, and can even comment on those shared by others.

Posted May 05, 2020 at 03:52pm
I was only briefly physically in her life but her warmth and love has meant more to me than I think I realized. She was an amazing and thoughtful woman with a severely funny streak. I will miss checking in with her and am sending so much love to the family. ❤️
Comment Share
Share via:
MC

Posted May 05, 2020 at 03:19pm
Dearest Allan, I am terribly sorry to hear this news & my heart breaks for you & your family. Gaby was not just my dental patient, she was more of my aunt, my friend. She was a light, a realist but an optimist & an intelligent beautiful lady. I thoroughly enjoyed her stories even though she was more interested in mine. She loved her daughters immensely & was so very proud of them. She was so excited to move into that house this past fall & she sent me the video tour. I was thrilled for her. She couldn’t wait to make use of that steam shower & sit looking out at nature when the chemo would become too much. She was so looking forward to life back out West with her beloved Allan & all their new ‘slate’ but more importantly to be closer to her girls. May the sun continue to shine on you all during this hard time. Gaby wouldn’t want it any other way.
Much love,
Melanie Collins - Gaby’s Dental Hygienist
Comment Share
Share via:
M

Posted May 05, 2020 at 03:00pm
May this tree be planted in memory of The Great Gaby. May her daughters be blessed with a beautiful memory whenever they stop & look out at nature. 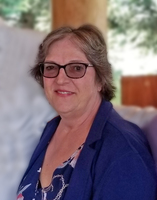 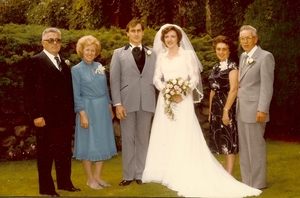