To share your memory on the wall of Evelyn Meek, sign in using one of the following options:

“Ev”, “Evy Jo” passed away peacefully, surrounded by family, on Friday, October 9, 2020, at the age of 92. Born June 1, 1928 in Kerrobert, Saskatchewan, Ev grew up on a farm in Court, Saskatchewan. At 12 she went to live with the Cowan’s for a year to drive Patsy to school at Burnbrae on Kit, a horse she continued to talk about in her later years; then returned home for her early teens. She could not wait for the school dances that her brother Melvin and Uncle Leif would escort her and her sister Madeleine to. She also loved to play baseball during the summer and sing and yodel with Madeleine while milking the cows. Ev told the story that her father said the cows never milked the same after they left. At 18 she moved to Pinkham, and later to Madison, Saskatchewan to babysit for Marg and Gordon English for a year and completed her grade 11 by correspondence.

At 19, Ev decided to head out on her own with Doreen Gamage to Red Deer for 4 years. In Red Deer she worked as a waitress at the Peacock Inn and later as a telephone operator for AGT and met her future husband Donald Meek. They moved to Calgary, where she worked for Dominion Bridge and married in 1951. She had her family, taught Sunday School and was active in the United Church, dancing, curling, the Jaycettes and was a big Calgary Stampeders fan. Their home was always full of music, singing and dancing and open to anyone that needed it and in fact had many young people living with them throughout the years. In 1967 they moved to Edmonton and then later to a farm west of Stony Plain. In 1974 Ev moved back to Calgary where she worked for Dr. Carl Reich, Carpetland, Lewis Stationery, Alberta Gas Trunk Lines and later as a leasing agent for many rental properties in Calgary. Ev also volunteered for the Crisis Line and Fraternal Order of Eagles Ladies Auxiliary, as well as census taking and political activities for Ralph Klein. Ev was involved with Fashions of Yesteryear, and later created Golden Years of Fashion, where the group put on fashion shows, modelling outfits from the 1800’s through to the 1920’s in senior facilities, the Calgary Stampede, Banff Parade, Innisfail Pioneer Days and many other events in and around Calgary. This became Ev’s passion for many years, sewing costumes and decorating hats and dolls for the shows. Ev loved to go dancing, several times a week if she could. In the last 4 years Ev’s home was at the Sage Hill Retirement Home where she received wonderful care until her passing.

Ev was predeceased by her parents, Peter & Thora (Dahl) Yalte and her siblings Melvin, Freida, Edna, Stanley, Herbert and Clifford.

A Celebration of Life will be held at Choice Memorial (105-4715 13th St NE) on Thursday, October 15, 2020 at 1:00 pm., followed by refreshments across the street at Koko’s Restaurant & Bar. Due to Covid regulations, the service will be limited to 35 people. Masks are required to be worn at all times within the funeral home. Please RSVP on the website so seating can be accommodated.

Ev’s cremated remains will be laid to rest alongside her parents, two sisters and two brothers, at Dorcas Cemetery in Compeer, Alberta on Friday, October 16.

A special thank you to the staff at Sage Hill Retirement Home for caring for Ev during the last 4 years.

Receive notifications about information and event scheduling for Evelyn

We encourage you to share your most beloved memories of Evelyn here, so that the family and other loved ones can always see it. You can upload cherished photographs, or share your favorite stories, and can even comment on those shared by others.

Posted Oct 15, 2020 at 09:46am
Our thoughts are with you all, we are sorry we are unable to be there in person. May you be filled with the peace knowing your mom was truly loved.

Posted Oct 13, 2020 at 02:09pm
My deepest condolences to you all. Auntie Ev was a true treasure. Always smiling and looking fantastic. I have many fond memories of her sharing her Avon samples with us girls. She always had a story to share and brought happiness to everyone who was around her. She will me missed. Sending love and hugs. I couldn't resist sharing this photo of her beautiful smile at my bridal shower. ( yes she can rock a dress made out of T.P. ) 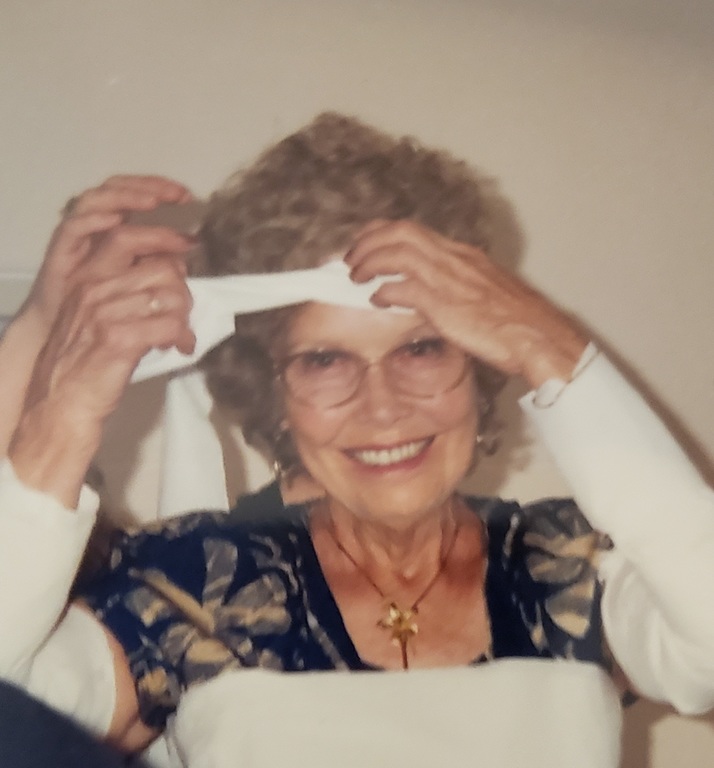 Posted Oct 13, 2020 at 08:42am
Our heart felt condolences. Evelyn was such a wonderful person . She will be sadly missed. Love and Huge Virtual hugs. From Ron, Toni & family.

Flowers were purchased and a memorial tree planted for the family of Evelyn Meek. Send Flowers 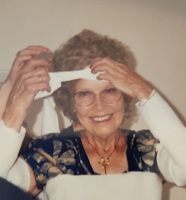 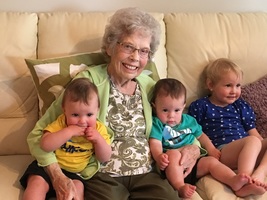