To share your memory on the wall of Doris Grant, sign in using one of the following options:

Doris came from humble beginnings and not the happiest of homes. However she always lit up a room with her smile. As a young woman she worked diligently to save her own money to go to business school after high school. She began her professional career as a bank teller in Hamilton where she met the love of her life Ross Vincent Grant. The story goes that Ross took a long time to muster up the courage to ask her out on a date. She was fond of recalling the double dates with Vera Mason and Dick Badger. Vera was Doris' roommate at the time and Ross became best chums with Dick. Vera and Dick were married first and it wasn’t long before Ross popped the question. Doris and Ross were married in Stayner Ontario October 24, 1953 witnessed by Ross’s good friend Jack Anderson and Doris’s sister Kathleen.

They returned from their honeymoon in the Smoky Mountains to settle into their beautiful new home on Deyncourt Drive in Burlington Ontario. It was complete with a garden and two apple trees in the backyard. It wasn’t long before they were blessed with two children John and Nancy.

Doris had an artist’s spirit as she loved to create beautiful spaces both inside and outside her home. She took art classes and was always working on some new craft to adorn her home. Doris was always curious to try new things and was quick to adopt a new computer into her home. In her 60’s she took classes at Mohawk College and soon she incorporated her new skills into her book-keeping and tax business.

Doris loved to visit friends and family and welcomed them often into her home. John and Nancy recall the bridge club gatherings with a smirk and a smile. When any member of the family came to visit before heading into the house, they would stop first to admire Ross’ garden. Doris loved to take the produce that Ross grew in his garden to lovingly create many fabulous family meals. She is most famous for making her chili sauce with Ross’ firm ripe tomatoes, a recipe handed down from her mother to her daughter and now grandson Bill. She was also famous for organizing the annual corn roast. Anyone who attended a Grant Corn Roast will have delicious memories of good food and laughter around a crackling fire in their backyard.

If you came to visit, Doris would greet you with warmth. She spent her life caring for others and volunteering. She was always on the go. Later in life after the death of Ross she dealt first with depression and then dementia with all the grace anyone could muster. In 2016 She moved to Alberta to be closer to her daughter.

Doris died on September 23, 2020 at the age of 96 in supportive living at Evanston Grand Village, Calgary Alberta. She will be honoured with a memorial bench on the Sauble Beach shore so others can rest comfortably to watch as children play in the white caps, or the slow descent of the sun at the end of the day or perhaps some fireworks just as she did.

Doris leaves behind a grieving family. John Grant, Zane and Davis. Nancy and Ron Stuewe, Bill and Beth, Erin and Travis Bebee. Extended family; Kathy and Mike Duffy, Krista and Chad Duguay, Curtis and Ava, Ronda and Charley, Kate and Matt Rait and baby to come. Bruce and Shirley Dyment, Mark and AnnMarie, Ben and Nick, Sandra and Dave Rodrigues, Steven and Michelle, Robert. A celebration of her life will take place sometime in the future when friends and family can gather safely and sing some of her favourtie songs.

Receive notifications about information and event scheduling for Doris

We encourage you to share your most beloved memories of Doris here, so that the family and other loved ones can always see it. You can upload cherished photographs, or share your favorite stories, and can even comment on those shared by others.

Posted Nov 20, 2020 at 02:59pm
Aunt Doris was always so welcoming. She would greet my children when they were young by telling them "it was so nice to have you visit, you can come back anytime, and you can even bring your parents ". I've adopted that little saying myself now. I always enjoyed visiting Aunt Doris and Uncle Ross. I miss them both.
Comment Share
Share via:

Posted Nov 18, 2020 at 05:51pm
Mrs. Grant and I sat together at one of Nancy's Westwind concerts. She was so proud of Nancy and her singing; couldn't wait for the group to gather on stage so she could just gaze on her lovely daughter. She worried most that we had chosen our seats badly and wouldn't be able to see Nancy clearly. Fortunately, our seats were excellent, and we enjoyed both the music and our visit. For myself, I had worried that I wouldn't be able to keep the conversation going. Ha! I needn't have worried. Powerful social skills honed over a lifetime stood her in great stead. I doubt the people sitting around us would have guessed that we were strangers. With Nancy as the focus of our discussion, we laughed and chatted easily. Mrs. Grant had quite a wicked sense of humour; it was wonderful to see her personality passed down so obviously to my much loved friend. It was, altogether, an evening I will always cherish.
Comment Share
Share via: 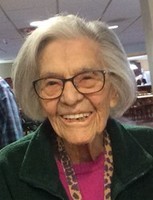 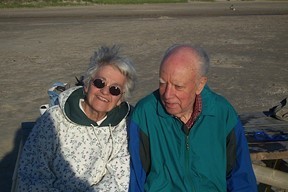 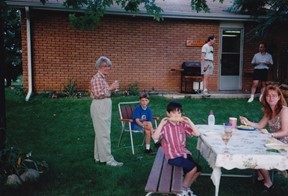