To share your memory on the wall of Delmar Fitzsimmons, sign in using one of the following options:

Delmar (Del) Merle Fitzsimmons, (born January 3, 1942), passed away peacefully at the Rockyview Hospital on July 5, 2020 after a year-long battle with pleural mesothelioma.

Delmar (Del) Merle Fitzsimmons, (born January 3, 1942), passed away peacefully at the Rockyview Hospital on July 5, 2020 after a year-long battle with pleural mesothelioma.

Born in Drumheller, Del spent the early years of his life in Delia, AB. His family moved to an acreage outside Calgary (the Silver Springs area) where he completed grade school. He went to high school at Queen Elizabeth, where he met his life-long love, Carolyn Deines. He was passionate about hockey and played for the Calgary Buffalos in the Alberta Junior Hockey League. Del had an opportunity to play for the Chicago Blackhawks farm team but decided that love mattered more. He married Carolyn in 1965.

Del apprenticed at Reggin Industries and became a journeyman sheet metal mechanic. From there, he became head of the food service department. In 1985, Del reformed the company as Reggin Industries Inc., in partnership with Dave Alle, finally retiring in 2003. He was called into service to consult on the rebuild of the Saddledome kitchens after the flood of 2013, using pencil, paper and phone in lieu of technology.

While he had a young family, Del spent his summers camping around Alberta and BC. Camping shifted to staying on a property bordering the Rocky Mountain Forest Reserve NW of Cochrane. He built a house there, which was dubbed “The Ranch” by his boys. Many weekends and summers were spent there, enjoying time with family and friends.

Del was heavily involved in the Calgary Kinsman where he whole heartedly enjoyed his time and made many lifelong friends. He was director of fellowship and planned many raucous adventures for his fellow Kinsman. They called him “Mr. Kingo-Bingo’, as he excelled during his term overseeing Kingo-Bingo Fundraising on CFCN.

Del enjoyed golf throughout his adult life and was always keen to get out on the course. He was proud of his hole-in-one at the Water Valley course. Del travelled extensively with Carolyn, visiting 5 continents as he explored. In his later years, he and Carolyn wintered in Loreto, Mexico. There, Del discovered a love for deep sea fishing. He made a mean fish taco, and his chocolata clams were praised by all who tried them.
Del is survived by: Carolyn, his wife of 55 years; his sons Robert of Invermere and Kevin (Lisa) of Cochrane; his 4 grandchildren (Grace, Olivia, Quintin and Elias); and his sisters, Terry and Darlene. Three days after Del’s passing, his identical twin brother Don followed him into death. Del was a loving husband, father, brother, and a dear friend to many. He will be deeply missed.

We invite you to share stories and condolences with the family via www.choicememorial.com. In lieu of flowers, donations to the Canadian Mesothelioma Foundation will be gratefully accepted. Thank you to the Cochrane Home Care Staff, especially Lisa, and the Dyspnea Clinic at the Tom Baker.
Read Less

Receive notifications about information and event scheduling for Delmar

Donations are being accepted for: Canadian Mesothelioma Foundation.

We encourage you to share your most beloved memories of Delmar here, so that the family and other loved ones can always see it. You can upload cherished photographs, or share your favorite stories, and can even comment on those shared by others.

I was shocked and Saddened to read of Del's passing.

I considered Del a Very Long Time Friend and I can always remember His Smile and Sincerity. When We last spoke (at a Hitman Game) He was so kind when I told Him of My Wife's passing.

He was always sincere and His many Friends and Acquaintances will dearly miss Him.
Sincerely,

Posted Jul 19, 2020 at 11:05pm
Dear Carolyn:
We were so saddened to read of Del’s passing. He was struggling when we last saw you two in Loreto but he was a tough guy and just carried on. We had many a visit and discussion down there and always enjoyed the company of both of you. We will sure miss seeing his smile on our trips down there. Hoping you are well and coping through this difficult time.

Posted Jul 18, 2020 at 03:39pm
So so sorry to hear of Del’s passing. My prayers are with you at this time of your loss. Hard for me to believe the twins are gone.
Sheila Rempel and Sharon and Gary Mathieson
Comment Share
Share via:

Posted Jul 18, 2020 at 10:13am
My condolences to the family I was very sad as were many of my coworkers at Cana when we found out of Del's passing. He was a pleasure to work with, professional and as a younger man he always provided an element of mentorship. Dels technical skill was impressive as was his ability to work with us all in getting the job done. Pulling Del out of retirement to help with the rebuild of the Saddledome kitchen after the 2013 food was such a fun experience, it was an environment he excelled in ensuring success of the team.
Kind Regards
Pierre Champness and the staff at CANA
Comment Share
Share via:
AF

Posted Jul 17, 2020 at 02:42pm
Dear Carolyn;
So sad.
You know more than anyone, Del's kindness, and generosity. We all will remember him for this.
In his chosen profession Del was brilliant. Implementing the design, construction and installation of equipment in large kitchens is as challenging as it can be. Del always made this look easy. He managed all this in very large projects including the Saddledome and the Telus Convention Center. Simply put, there was nobody better.
We are here if you need some help and assistance either in Calgary or in Loreto
We wish you the strength and the courage to carry on as he would have wished.
Art and Donna Froese
Comment Share
Share via: 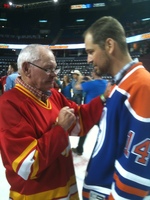