To share your memory on the wall of Daniel Huber, sign in using one of the following options:

Daniel Huber died Tuesday, July 14, 2020 at the age of 83 after a progressive struggle with numerous health issues. A prairie boy from Grayson, Saskatchewan, Dan was a veteran of the Cold War, retired from Canadian Armed Forces (Air Control), as well as from a second career with the Solicitor General of Alberta. He was a voracious reader, loved details, worked on the railway, farmed, raised cattle, fished, was an enthusiastic community volunteer [disc jockey in 1960’s in Puntzi Mountain, BC, to Scouting in North Bay Ontario], gardened, had seasons’ tickets to the Stamps, was the Calgary Youth Flag Football League’s biggest fan, RV’d across North America, worked or researched on more ancestry, home renovation, building or health related projects than can be counted, and throughout always loved his family unconditionally.

He was predeceased by the love of his life, Lillian (née Stevens: McKay/Fiddler ancestors). They were soulmates married for 60 years who met in the RCAF, travelled the world, and settled back in Alberta - Grande Cache, then Calgary. Dan is also predeceased by his parents Elizabeth Kopetski and Martin Huber who both had immigrated to Canada from Romania as well as his brothers Adolf Huber (Eda Lang), Antonio, Jack Huber (Theresa Molly Feigel), Martin Huber (Grace Morrish), Aloysius Huber, and sisters Eva (Karl Tank), Agnes (Gabriel Ballan), Angela (John Frederick Stein), Casper Zerr, Elizabeth Huber and Magdalena (Albert Alfred Carl Rodenbush).

The family wishes to extend thanks to many friends and family who helped during this time [Kim, Cherry, Rob and Vicky especially], as well as the nursing staff with the Care Coordination Service, and Palliative Home Care (Alberta Health Services); Colonel Belcher, especially Deniece- Chartwell’s Program Manager; the nurses and staff with Symons Valley First Care; Gerard Mercier, and Drs. Yuen, H. Banijamali, Craighead, Bebb, J. Heyland, J.Clarkson, and J. Peloquin who gave us all of their compassion and skills. Additionally, the staff with both Rexall Panorama and Co-Op Brentwood pharmacies, as well as Deaf and Hear Alberta were tremendous sources of support for our family.

We ask that donations in Dan’s name be made to a local not-for-profit organization of your own choice.

Every day is a precious gift.

Receive notifications about information and event scheduling for Daniel

We encourage you to share your most beloved memories of Daniel here, so that the family and other loved ones can always see it. You can upload cherished photographs, or share your favorite stories, and can even comment on those shared by others.

Posted Jul 20, 2020 at 01:56pm
Myself, Mr.Forti, Mr. Hasselberg, Mr. Robinson, Mr.Taylor, Mr. Collins, Mr.Phillips, Mr.Keeping, Mr.McIntyre and Mr. DeFransceso all have had the wonderful memories of working and living with Dan while working at Camp Kananaskis. We have countless stories of this wonderful man. Always the Officer and the Gentleman. I will always remember his professionalism and his kindness when calling his wife Lil from camp. Always a door opener, and would lay his jacket over the mud for any woman and child to cross safely. We adorned Dans unwavering respect for others. Friendship and family were deeply protected as he would stand by you always. Personally, Dan taught me how to play chess and at times I could annoy him a bit (a lot) as a young man but he always saw the good in me and the potential. Giving me chance after chance to be the gentlemen he knew I could be. We are so happy he was able to have a full retirement. With much respect and love we sadly say goodbye and our friend Officer Dan Huber.
Comment Share
Share via:
SJ

Posted Jul 16, 2020 at 11:57am
I remember a visit to North Bay I called him Uncle Dan but he said you are an adult now please call me Dan. He was 7 years older than me. Another time he visited us in the year he joined the Armed Forces Although he had visited many time after that. I was so happy to see him last year. At this sad time you will find comfort and strength knowing that others care about your loss Our sympathy God Bless you Troy, Karen and your family.

Posted Jul 15, 2020 at 11:34am
I worked with Dan at the remand centre. I remember him as an excellent officer and fine gentlemen. I sympathise for your loss.
Comment Share
Share via:
DR

Posted Jul 15, 2020 at 09:23am
My sincere condolences to the family and friends of Daniel Huber. My Dad and Daniel were cousins. Daniel's father Martin had a brother, Johann Adolphus, who was my grandfather. My father was John Huber, also born in Grayson. It's unfortunate that my father never talked much about his family. From reading his obituary, it is quite apparent that Daniel led a very full and rewarding life, and you will have countless memories to cherish. Godspeed, Daniel.
Comment Share
Share via: 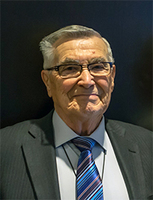