To share your memory on the wall of Barbara Neigel, sign in using one of the following options:

Provide comfort for the family of Barbara Neigel with a meaningful gesture of sympathy.

Barbara Neigel (nee Huck) of Calgary passed away peacefully on Tuesday, August 27, 2019 at the age of 78 years. Barb is lovingly remembered by Neill, her husband of 54 years; her children, Karyn (Brad) Likuski and Lori (Roger) Broberg; her cherished grandchildren, Megan, Kayla, Taylor, Lucas and Joshua, and numerous extended family members. She was pre-deceased by her parents, Muriel and Orville, and her brother Garth. Barb was born in Brandon, Manitoba in 1941 and was the eldest of two children. She attended St. Mary’s High School. Barb and Neill married in 1965. Barb had a distinguished accounting career in the oil and gas sector. It is a true testament to her strong character and work ethic that she was able to build a very successful and fulfilling career. Barb retired at the age of 55 to pursue her true passions.

Barb had several interests in life and was many things to many people. She was a loving wife, mother, grandmother and a true friend to many. She was an avid Calgary Stampeders fan, a political junkie, and a world traveller. Her five grandchildren just had to hear the words, “Grandma’s homemade pie”, and they couldn’t wait for her arrival.

One of her greatest passions was travelling the world. During the early years, when the family was young, she could be seen making the weekly camping trek to the mountains and National Parks near Calgary. In summer months, the family would head for the tranquility and beauty of Oregon’s Coastline. Barb’s pure joy and love of nature were very evident during these family vacations. In later years, Barb carried on her passion for exploring the world by travelling and taking cruises abroad with Neill. These travels were a true highlight in her life.

Barb and Neill were avid Calgary Stampeders fans; holding seasons tickets for 25 years. Not only could you find them at the games, they were such impassioned fans, often you would find them at practices as well. Even in Barb’s final days, she found great pleasure in watching the televised CFL games, and of course cheered the Stamps on.

Barb took great pleasure in life. Her ability to appreciate the smallest of things was the true essence of who she was. She had a natural ability to chat and carry on conversations about almost any subject. She had a way of listening to people and responding in just the right way. As most know, Barb loved a good cup of coffee. Particularly in the latter years, at any time of day, Barb could be seen with the telephone attached to her ear, laughing during the conversation, with a good cup of coffee at her side.

Throughout Barb’s life she maintained a strong will to fight through any adversity she faced. People who knew her well were very familiar with her expression, “I’m still walking and I’m still talking, so hey, I’m doing just fine!” Barb’s unfaltering strength and courage through her final journey was an inspiration to her family.

A celebration of Barb’s life will be held on Sunday, September 8, 2019 at 11:00 a.m. at the McKenzie Lake Residents Association Beach Club, 16199 McKenzie Lake Way SE, Calgary AB. Barb’s family wish to extend an invitation to all of Barb’s extended family and friends to join them to share memories and celebrate her life.

Barb’s family would also like to extend their heartfelt thanks for the compassionate care she received from the staff and volunteers at the Tom Baker Cancer Centre, and the Southwood Hospice. Every person Barb and her family encountered helped to make this journey a little brighter along the way.

Receive notifications about information and event scheduling for Barbara

We encourage you to share your most beloved memories of Barbara here, so that the family and other loved ones can always see it. You can upload cherished photographs, or share your favorite stories, and can even comment on those shared by others.

Posted Sep 04, 2019 at 01:45pm
Memories of the fun we had in Lake Windermere at the Cowan Cup Horseshoe Tournament every September Long Week-end are almost impossible to describe. When laughing continues throughout ones life you know it was special. Good-bye my dear friend. Ron & Joan Dowson
Comment Share
Share via:
BH

Posted Sep 04, 2019 at 12:06am
With her determination and fighting spirit I so hoped my dear and special cousin would win her battle and permit me to share future conversations that included her unique, giggly way of laughing. I will miss her so very much. My heart goes out to everyone in the family as you grieve her loss. 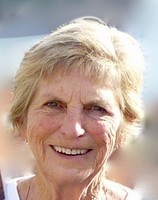