To share your memory on the wall of William "Bud" Ellis, sign in using one of the following options:

Provide comfort for the family of William "Bud" Ellis with a meaningful gesture of sympathy.

After retiring and moving to Kingston, Bud worked at Dupont, Canada from 1962 to 1976 and was an avid volunteer with the Kingston Township Fire Department. After moving west to Red Deer, he worked with Haliburton Services from 1976 until he retired in 1992.

Bud was pre-deceased by his first wife Alma (nee Shaftoe) in 1984, and his second Anita Pauline (nee Ambrose) in 2013.

Bud will be lovingly remembered by his 3 daughters Debra Ann (Rod) Fraser of Bath, ON, Kimberly Mae (Gord) DeLaval of Estevan, SK, and Tracy Dale (Jeff) Wanner of Okotoks, AB. He also leaves behind his grandchildren Lindsay Lee, Trisha Lynn, Toyia Denise, and Rory Dean, and his great grandchildren Hailey, Izzabella, Mila, Sophia, Mason, and Emelyne. His stepdaughter Laura and his stepgranddaughters Lily and Emily will fondly remember him too.

Bud had a quirky sense of humor as you saw daily on his Facebook account, and he enjoyed his life in Okotoks with his pub friends. Donations to The Heart and Stroke Foundation or a charity of your choice in memory of Bud would be greatly appreciated by his family.

We encourage you to share your most beloved memories of William "Bud" Ellis here, so that the family and other loved ones can always see it. You can upload cherished photographs, or share your favorite stories, and can even comment on those shared by others.

Flowers were purchased for the family of William "Bud" Ellis. Send Flowers 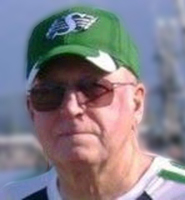