To share your memory on the wall of Verna Birkbeck, sign in using one of the following options:

Verna May Birkbeck passed away in Calgary on January 6, 2020.

Verna May Birkbeck passed away in Calgary on January 6, 2020.

She was born in Vancouver BC on September 20, 1929 to Eva Janetta and Henry Lorne
Sherwood. She married Maurice Birkbeck on June 24, 1949, and Calgary became their home for most of their married lives.

Six sons followed, which meant a full and busy life for Mom raising us. But there were
occasional camping and fishing trips, and long drives to nowhere in the country! The house
was always a hive of activity with her six sons and their friends coming and going, but Mom
always took it in her stride.

Later in life, Verna became one of Jehovahs Witnesses and was baptized in June 1982 at the
district convention in Edmonton. She and Maury enjoyed serving in the truth together.

In May 2015, declining health prompted a move to St. Marguerite Manor. The family would like
to thank St Marguerite's for their compassionate care of Verna over the last 4 1/2 years.

Verna was predeceased by her parents; husband, Maurice and her eldest son Robert. She
is survived and will be missed by her sons Lonny, Don, John, Tom and Steve and their families.

A Memorial Service will be held on January 18, 2020 at 2pm at the Ranchlands Kingdom Hall,
Lower Hall which is located at 1705 Ranchlands Way NW, Calgary, Alberta

We encourage you to share your most beloved memories of Verna here, so that the family and other loved ones can always see it. You can upload cherished photographs, or share your favorite stories, and can even comment on those shared by others.

Plant a Tree in Memory of Verna
Plant a tree 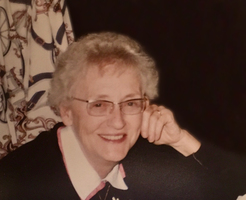