To share your memory on the wall of Valerie Nickel, sign in using one of the following options:

Valerie Rose Nickel passed away peacefully at the age of 76 at the Peter Lougheed Hospital with her daughters Tina and Cindy by her side and surrounded by family.

Valerie Rose Nickel passed away peacefully at the age of 76 at the Peter Lougheed Hospital with her daughters Tina and Cindy by her side and surrounded by family.

Valerie was certainly colourful, both in her clothing and the things she surrounded herself with. She was the queen of matching her outfits, right down to her shoelaces. Her favorite colour was pink as anyone who knew her was aware. She bought everything pink or pretty and painted just about anything she could get her hands on. If it wasn’t quite right, she would use what was at hand – shimmery pink nail polish which her granddaughters called “old lady pink”. Nothing boring allowed. You were welcomed into her home through the pink front door and it went from there. Everything pink, yellow, sparkly and bright. She loved lights. She had over 20 of them at one time in her front room and would turn them all on every day.

She was always there for her granddaughters, along with them for her. From time to time when either she or they would need each other the living arrangements were interesting, which meant they had to endure the lovely (spooky) dolls in the basement. There were also a few late night restaurant deliveries for eating frenzies.

She loved going out for dinner, dancing, driving, drawing, shopping, tile rummy and solitaire. As her health challenges increased, she and Rosie could often be found in her favorite recliner or on her front swing. Afternoons with her friend Renate were filled with laughter.

In her younger days she was very athletic, playing both basketball and softball, softball being her great passion. She could throw, catch and bat a ball with power.

Her appetite was surreal. She ate everything (best before dates be damned lol) and when Cindy took her out for dinner, she willing to try anything new.

Tina was her rock, her shopping mate, protector, guide, advocate and guardian angel. “Tina will make it happen” became our mantra.

She was a much-loved mother, sister, grandmother, aunt and friend. She will be missed.

A Graveside Service for the urn is to take place at Mountainview Cemetery on Friday, October 23, 2020 at 1:00 pm. A Memorial Service will be held at a later date. To view and share photos, condolences and memories of Valerie, please visit www.choicememorial.com.
Read Less

Receive notifications about information and event scheduling for Valerie

We encourage you to share your most beloved memories of Valerie here, so that the family and other loved ones can always see it. You can upload cherished photographs, or share your favorite stories, and can even comment on those shared by others.

3 trees were planted in the memory of Valerie Nickel

Posted Oct 22, 2020 at 10:14pm
I spent a lovely afternoon with Valerie in July when I came to Calgary for my great granddaughter’s birthday. We reminisced about the old days when we lived next-door to each other on 14th Ave., SE. I was seven when her mother brought her home from the hospital. Her sister Barbara and brother Gerry were excited too. I took Valerie under my wing and wheeled her up and down in front of the house. She became my little doll. I loved her cheery smile and her robust laugh. Her personality grew as she did. She became a loving friend and amazing daughter to her mother, and the proud mother of two fine girls Tina and Cindy. I will miss her smile and her hearty laugh and her accepting way. I love you Valerie and will miss you. We will meet one day again.

Posted Oct 20, 2020 at 01:08pm
Some of my fondest memories of Valerie are our payroll days at Canada Post. We were always joking and having a laugh. Valerie will be missed and my thoughts and prayers go out to her family. Jean Benjamin
Comment Share
Share via:
C

Posted Oct 17, 2020 at 08:51am
A few years ago around 9 o’clock at night I was grocery shopping over at Safeway and I decided I was going to buy my mom a bouquet of flowers and for some reason I decided she had to have it right then and there… So after my groceries I drove down to my moms house with the bouquet it was approximately 10 o’clock at night… I phoned her while I was on the way to see if she was awake and she was . Her home care worker had already come and gone… And she was just sitting with Rosie the best puppy in the world, on her chair and she told me she was coloring… We talked the whole time while I drove down there on the phone… When I got close and pulled up in the driveway Rosie didn’t bark and nobody noticed I was there, so I decided I would just go ring the doorbell and surprise her… When I rang the doorbell she said to me ,“Oh my God Cindy the doorbell just rang“ I said oh well who do you think it might be ? she said “I don’t know my home care worker Already came tonight “I said oh my goodness…
“I said what are you gonna do“ she said can you stay on the phone with me while I answer the door?“
“I’m scared…”
“I said then be careful opening the door…“
She said “OK just stay on the phone with me… “
So I stood at the door holding my cell phone to my face with the bouquet of flowers in my hand…
I rang the doorbell one more time to see if she would ask who it was or pause to look through the peep hole
But she didn’t she just open the door really quickly… And gave me a face of
Surprise… And then she spoke to me through the phone and said “that’s not funny were you trying to scare me… ?!”
And I looked back at her and I spoke to her face-to-face not through my cell phone and said how come you just open the door without asking who it was… And she said while talking to me still through the phone in her hand and said “well I was OK and safe because I was talking to you on the phone while I open the door!”
… LOL
Then she noticed the flowers and her face lit up… It was worth the drive to her house at 10 o’clock at night… Considering I work at 4 AM
I’m certainly going to miss being able to do that
💔❤️
Comment Share
Share via:
PB

I posted this on Facebook but thought I would share here too. One of my best memories of Val was when her sister- in-law Jill (my sister) brought her over to help us stain cedar shakes at my son’s house in Inglewood. Val spent the afternoon sitting in a lawn chair with a paint brush in hand, chatting, laughing and having the “occasional” smoke break. It was a really nice get together. 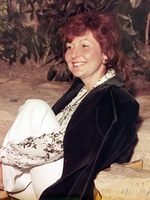 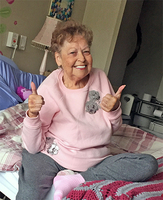