To share your memory on the wall of Valerie Masinda, sign in using one of the following options:

Valerie Gail Masinda of Strathmore, Alberta passed away in a fatal car accident on March 18, 2020 at the age of 68 years. Valerie was born in East York, Ontario on July 4, 1951. She grew up and lived in southern Ontario, which was where she married her first husband, Victor Oliveira in 1972 and had two children together, Crysti and Renee. In 1996 Valerie moved to Calgary, Alberta, where she lived with her second husband, Louis Skocen for many years.

Valerie worked in a few different jobs throughout her life, but she had recently retired from her most impactful position at WestJet as a Customer Service Agent; a position that she was very proud to serve in. Valerie worked at WestJet for over 10 years and spoke often of her adventures and experiences while working there. She kept in touch with many of her former co-workers and considered them very good friends.

She spent her first couple of retired winters as a snowbird living in Mesa, Arizona, a dream she had for a long time. Valerie had recently settled year-round in Strathmore, Alberta, where she kept busy socializing with her fellow retired neighbours.

Valerie positively impacted so many people that she crossed paths with. She was able to smile in the face of trouble and keep a positive attitude. A light has gone out with her passing.

Valerie did not wish to have a service after her passing. If friends so desire, in lieu of flowers donations can be made in Valerie’s name directly to the Wheatland County Food Bank.

Cremation services are being conducted by Choice Memorial Cremation and Funeral, Calgary. Condolences, memories and photos may be shared and viewed on Valerie’s obituary at www.choicememorial.com.
Read Less

Receive notifications about information and event scheduling for Valerie

We encourage you to share your most beloved memories of Valerie here, so that the family and other loved ones can always see it. You can upload cherished photographs, or share your favorite stories, and can even comment on those shared by others.

Posted Apr 17, 2020 at 07:58pm
It is so sad to lose Gail in this tragic way. Even though we did not meet up that often with my side of the family being in the UK, it was so good to catch up with Gail and the Canadian side of the family on the very infrequent occasions we managed it.
Gail you will be missed and remembered with love and affection by your family and all of us who knew you!

Posted Apr 06, 2020 at 04:31am
Dear Renée, Christi, Heather and families.
Sending sincere condolences to you all on the sad loss of Valerie and my thoughts are with all of the family and her friends at this difficult time.
There are few words that will really fill the sadness and emptiness you will be feeling in your hearts but hopefully knowing how thought of by others she was may be of some comfort to you.
I have have such fond memories of my dear cousin 'Gail', as she was known to me. Although I have not been so fortunate to spend lots of times with Gail over the years because of living overseas but I do have some really good memories of the lovely times that we did manage to spend together, when I was able visit Canada.
Thinking of you all
Much love
Karen and Family

Posted Mar 24, 2020 at 02:57pm
Our hearts and prayers are with you all Renee. Our deepest condolences. It was our pleasure having had a opportunity to spend time with your mom in 2018. Love you all and you know we are here for you. Love Cheryl, Michael and family.
Comment Share
Share via:

Posted Mar 23, 2020 at 09:35pm
I will always remember Val with a smile on her face.
She was very proud of her children ad grandchildren, loved her family dearly.
Val was full of life and always kind & generous.
She will be missed.
Regina
Comment Share
Share via:
N

Posted Mar 23, 2020 at 02:57pm
Such a beautiful person whom I’m blessed to have crossed paths with in this lifetime . A true spirited personality that shined bright . You will be sadly missed
by many ❤️ RIP friend
Comment Share
Share via: 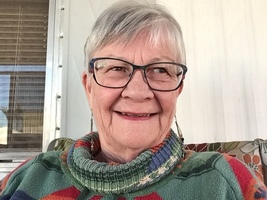