To share your memory on the wall of Terrance Wideen, sign in using one of the following options:

It is with heavy hearts we announce the COVID free passing of Terry Wideen of Calgary.

It is with heavy hearts we announce the COVID free passing of Terry Wideen of Calgary.

Terry was born in Canwood, Saskatchewan and was the youngest of 5 boys to Andres (Widen)and Florence (Moline) Wideen. He attended DeVry Tech in Toronto and then took a job in Sioux Lookout, Ontario, where he met and married his wife Wanda (Shukys). Through his work in technology he worked in many places and they lived and raised a family in Toronto, Cold Lake Alberta and finally settled in Calgary. After he retired, never one to sit still, he took a position with the Calgary Board of Education and found his joy in the energies and laughter of the children.

He leaves behind his wife, Wanda; children, Tony (Roxanne) and Tina Wideen; three beautiful grandchildren, Justin (Chantel), Kassandra Shier and Miranda Wideen; as well as two special great grandchildren, Zoey and Caden Shier; his brother, Marvin (Loretta) Wideen of Coquitlam, BC and many cousins, nieces and nephews. Terry was predeceased by his brothers, Evert, Walter and Raymond Wideen.

Terry enjoyed the outdoors and fishing, camping, hunting or winter sports were always part of his life. He was a huge supporter of the Calgary Stampeders football team; he held season tickets for many years and attended every game and many Grey Cups. Terry loved his local sports teams and was rarely seen without a red jersey or apparel of hockey or football even though he still always held a soft spot for his Saskatchewan “home” teams.

The family would like to thank the doctors, nurses, Aids and Volunteers at the Foothills Palliative Care unit for the spectacular care he received in a trying time. We pray they stay healthy and safe while they do what they do best.

In lieu of flowers, donations may be made to The Canadian Red Cross, Heart & Stroke, Children Wish, Kids Sport or the Foothills Hospital.

Due to COVID restrictions there will be a small family gravesite funeral. A virtual Celebration of Terry’s Life will be held in December and we hope to be able to celebrate in person for his birthday. Please contact the family directly if you would like to be included.

We appreciate all the love and support that has been given to us in this time and ask that you all stay safe. To view and share photos, condolences and memories of Terry, please visit www.choicememorial.com.
Read Less

Receive notifications about information and event scheduling for Terrance

We encourage you to share your most beloved memories of Terrance here, so that the family and other loved ones can always see it. You can upload cherished photographs, or share your favorite stories, and can even comment on those shared by others.

Plant a Tree in Memory of Terrance
Plant a tree 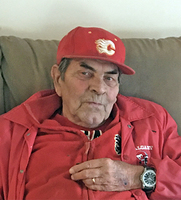