To share your memory on the wall of Sven Torgerson, sign in using one of the following options:

Provide comfort for the family of Sven Torgerson with a meaningful gesture of sympathy.

Sven Edward (Ed/Eddie) Torgerson, born July 26th, 1952 in Lanigan Saskatchewan, passed away peacefully and surrounded by family, on October 28th, 2019 in Calgary, Alberta at the age of 67.

Ed grew up on a farm near Algrove, Saskatchewan. Upon finishing grade 8 he worked in Tisdale at the Coop and Archerwill at the Einarson Garage, before working in Thompson and Victoria. He made his way to Calgary and had a number of different jobs. Those jobs took him all over Canada; he worked in Saskatchewan, Alberta, BC, Manitoba, Labrador, the Yukon and NWT/Nunavut. He also worked internationally in Chile, Mongolia, Argentina and Mexico as a diamond driller. He even brought his daughter over to visit in both Mongolia and Argentina. In recent years he worked for Kidco, in Calgary, as a heavy equipment operator. At the end of 2018 he retired after a lifetime of hardwork – of which he was proud.

He lived an interesting life and his family and friends will undoubtedly recount legendary stories of him for decades to come. He will be remembered for his unmatched sense of humour, quick wit, ironclad memory, generosity, strength, and having no time for bullshi**ers. Eddie was also strong-willed and smart as a whip when it came to almost everything, but especially when it came to vehicles, nothing stumped him! When he wasn't watching sports and enjoying his own fine cooking in the solitary comfort of his home, you’d probably find Eddie in a garage spending countless hours helping out a family member or friend. Or, perhaps, taking the bench grinder to his dentures.

Sven was pre-deceased by his parents, Sidney Edwin Torgerson and Edna Cora Torgerson, and his older brother LuVern Torgerson. He is survived by his daughter, Katie Leicht; sister, Debbie (Marvin) Dease; aunts, Lillian Coen and Joan Hamilton; many cousins and his niece and nephews, Kevin (Joanne) Torgerson, Kelly Torgerson, Kelli (Don) Morin, and Sean (Amy) Dease, and their mediocre children, who will undoubtedly go on to make their ‘Auntie Eddie’ proud.

At Ed's request there will be no funeral but an informal Celebration of Life at Atlas Pizza on November 17th from 1-4pm. His request to dump his ashes down the toilet may or may not be honoured. Alternatively, they may be sprinkled on Debbie’s garden ‘to kill her flowers’ or in his beloved truck – ‘once Rod and Janet have finished cleaning it’.

We encourage you to share your most beloved memories of Sven here, so that the family and other loved ones can always see it. You can upload cherished photographs, or share your favorite stories, and can even comment on those shared by others.

Posted Nov 04, 2019 at 11:10am
We were so sorry to hear of Eddys passing, he will be missed.
With our deepest sympathy,
Roger and Debbie Torgerson

Posted Nov 03, 2019 at 09:25pm
Sincere Sympathy to all. It was always fun being around Eddy, he could make us laugh and smile all the time. Great memories indeed.
Robert and Sandy Wilson
Comment Share
Share via:
JW 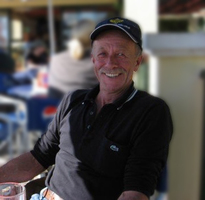