To share your memory on the wall of Shirley Jeffries, sign in using one of the following options:

Your condolence has been submitted for approval. There may be a delay before posting.

It is with great sadness that we announce on October 10, 2020, Shirley Vivienne Jeffries (née Harry) suddenly and quietly passed away in her sleep shortly after her... Read More
Shirley Jeffries
October 8th, 1934 - Saturday, October 10th, 2020

It is with great sadness that we announce on October 10, 2020, Shirley Vivienne Jeffries (née Harry) suddenly and quietly passed away in her sleep shortly after her 86th birthday.

Shirley emigrated to Canada in 1963 and slowly moved west from Deep River, Ontario to Pinawa, Manitoba, then to Sherwood Park, Alberta, and finally to Cochrane, Alberta. Later in life she discovered a love of cruising, going to Mexico three times, all the way around South America twice, and to Hawaii. Shirley was planning her next cruise - to Alaska. Shirley was very active in volunteer activities and walking groups in Cochrane, and appeared more than once in the local paper. She also enjoyed silver smithing, stained glass, sewing, and was a fantastic cook.

Shirley's family would like to acknowledge the loving care provided by the staff at the Colonel Belcher. A private family ceremony will be conducted at a later date. Donations in lieu of flowers may be made to the Cochrane Food Bank.

Receive notifications about information and event scheduling for Shirley

We encourage you to share your most beloved memories of Shirley here, so that the family and other loved ones can always see it. You can upload cherished photographs, or share your favorite stories, and can even comment on those shared by others.

Posted Oct 23, 2020 at 01:25pm
We are so sorry to hear of the sudden passing of Shirley and send our deepest condolences to her family and friends. She was our neighbour when she lived in Sunterra Ridge and we always enjoyed our visits and conversations with her. I always appreciated how she treated our children with love and kindness. And they always looked forward to trick or treating at her house as each year they received hot chocolate packages (reserved especially for them). Shirley was a lovely soul and she will be missed.

Thank you Kim. What a lovely story to hear about our Mam. We truly appreciate your words. Thank you so much for reaching out to us. We will miss her, that’s for sure. Sherryl
DC

Posted Oct 22, 2020 at 12:21am
Dear Kim,
I was saddened to hear of your mom's passing. I have many memories of Shirley throughout our friendship. She was always dressed so beautifully with her lovely pins and broaches. She certainly was a classy gal. I also remember how in love she was with her precious grandaughter Elyn. They had a special bond that continued to grow over the years. I am thinking of you and your family during this difficult time my dear friend.
Love
Donna
Comment Share
Share via:
SJ

Thank you for your kind thoughts and remembrance, Donna. Mam was able to meet Elyn’s daughter and more importantly Elyn was able to show off her granddaughter to her much loved Mamgu. (Mamgu being Welsh for Grandmother) Sherryl
AC

Posted Oct 18, 2020 at 11:35pm
So sorry to hear of Shirley’s passing. I always enjoyed our visits and her wit and sense of humour “kept me on my toes” (she would say to me)! She loved escaping with a great book and always had wonderful recipe, gardening and cruise recommendations! Thinking of all of you and remembering her smile, giggle and wit!
Comment Share
Share via:
SJ

Hi Amie, Mam enjoyed her visits with you too. She loved the way you did her hair and tended her tootsies. She spoke about you often. Thank you for your caring comments. Sherryl
PB

Posted Oct 16, 2020 at 05:46pm
Dear Kim and family enjoyed the visits I had with your mom always thought she was a Fiesta one ,remember the good memories and times you had.Pat and Dave Buckler
Comment Share
Share via:
A

Kim , Bruce, Elyn and Pat Thinking about you. Big hugs for all
SJ

Thank you for your kind thoughts. Its lovely to know the lives our Mam touched. Sherryl
SJ

Thank you Pat and Dave. It is soothing to know our Mam was appreciated by others And lovely to hear it. Sherryl
SJ

Thank you so much Pat and Dave. It’s lovely to hear that our Mam touched your lives, I think many found she was a spirited woman! Sherryl
4 Comments | Show All 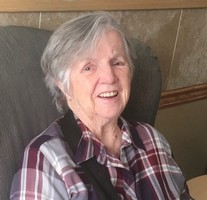 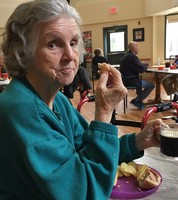