To share your memory on the wall of Samuel Wing, sign in using one of the following options:

Samuel James Wing was born in the second day of the ninth month of 1948 in Yee Hing, China. He immigrated to Canada as an infant and grew up in Moose Jaw, Saskatchewan with his mother and three brothers, Ken, Dick and ... Read More
Wing, Samuel James

Samuel James Wing was born in the second day of the ninth month of 1948 in Yee Hing, China. He immigrated to Canada as an infant and grew up in Moose Jaw, Saskatchewan with his mother and three brothers, Ken, Dick and Joe. Educated at the University of Saskatoon, he earned a Bachelor’s Degree in Engineering, and a Master’s in Geology, which allowed him to build a successful career in the oil and gas industry. He also made a number of lifelong friendships through his studies, particularly fellow members of The Ore Gangue.

Sam was wed twice. He married Jackie Daost as a young man and Deanna Rempel at a mature age, with whom he remained. He had a daughter, Lachlan, and three sons, Michael, Nolan and Adam. He loved his family and worked hard to take care of them.

Sam’s first passion was golf—playing when he could, planning or simply watching when he couldn’t. He also loved watching hockey, camping, playing the markets, and reminiscing about the travels of his youth. He was fair-minded, self-assured and tenacious, and will be missed by all who knew him.

In lieu of flowers, donations may be made in Sam’s memory to his preferred charity The Mustard Seed

In accordance with Sam’s wishes, there will be no Memorial Service. To view and share photos, condolences and memories of Sam, please visit www.choicememorial.com.
Read Less

Receive notifications about information and event scheduling for Samuel

We encourage you to share your most beloved memories of Samuel here, so that the family and other loved ones can always see it. You can upload cherished photographs, or share your favorite stories, and can even comment on those shared by others.

Posted Mar 28, 2020 at 11:54am
It’s always sad to lose a friend, but even tougher when they are taken away before their time.
From our days of being classmates at the U of S, to grad studies field trips, to our camping trips , to the innumerable golf games over the years, we shared a lot of good times together. Sam had an infectious laugh that that affected everyone around him. He was also a very astute individual and nobody “pulled the wool’ over Sam’s eyes. He was a tenacious negotiator (relentless?) and I often ask myself why I never took Sam along to help me with my vehicle purchases over the years???
All of Sam’s golf buddies will remember him for the tireless efforts put forward in organizing our annual Hackers Golf Tournament for the past twenty years.Thanks Sam!
Now that you are up there with your idols Arnold, Sammy, and Ben, may you keep hitting those drives long and straight!
Rest in Peace!
Your good friend-Suds

Posted Mar 26, 2020 at 12:36pm
Sam was a patient of mine at ID Dental. I was his hygienist. I always had nice conversations with Sam, and looked forward to seeing him. Without fail, Sam would always compliment my teeth and tell me he wished he had teeth like mine. The highest praise you can receive as a dental professional. I was so very sorry to hear that Sam had passed away. My most sincere condolences to his family and loved ones. My thoughts are with you during this sad time. He will be missed.
Comment Share
Share via:
N

Posted Mar 23, 2020 at 09:16pm
We were shocked and deeply saddened to hear about Sam's sudden passing.  Like others, one of the first things that comes to mind about Sam was his smile and propensity to laugh.  He was always quick to offer a hand, an idea or a joke. He had an outgoing personality and was a pleasure to spend time with.  Sam will be fondly remembered and deeply missed by family and friends.
Nolan & Sue
Comment Share
Share via:
DR

Posted Mar 23, 2020 at 11:36am
I was so shocked and saddened to hear of Sam's passing.
My very deepest condolences to Deanna and Sam's family, there are no words, there was truly no one like Sam. He was a sensitive and kind man with a good heart, and such a character with a great smile and laugh. And so refreshing because he was always willing to express his opinions on something and could be quite enthused in discussing them...although I always went into those conversations knowing the discussion would not likely result in him changing his mind :-)))
I remember back in the day when I first met Sam and he was joining the company, he had a special request that we work a large
number of 8's into his salary - I think we ended it in 88 cents to get as many in there as we could. For that alone, I would never forget him, but there are many other memories with Sam that I hold fondly in my heart.
Rest in peace Sam, I will miss you.
Denise
Comment Share
Share via:
BL 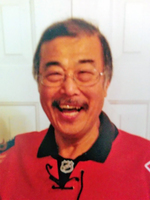