To share your memory on the wall of Ronald "Ron" Milton, sign in using one of the following options:

Provide comfort for the family of Ronald "Ron" Milton with a meaningful gesture of sympathy.

It is with great sadness that the family announce Ron's passing on October 23, 2019 age 82 at the Black Diamond Oilfields Hospital after a brief battle with cancer. Ron was born on April 10th, 1937 in Lethbridge, Alberta. Ron is survived by his sons Randy of Donnelly, AB, Richard (Cindy) & Rod (Monica) of Calgary, five grandchildren, Joshua, Zachary, Carter, Melissa, Stephen and four great-grandchildren, John, Nick, Grace & Max and his partner Lyn Fitzmaurice. Ron was predeceased by his wife of 54+ years Deanna (Cotton) and his parents Reginald and Annie (Brigden) Milton.

Ron retired from TELUS (AGT) in 1991 after thirty-four plus years working across Alberta. While working at AGT Ron was the President of the Telephone Pioneers of America. Ron and Deanna retired to Turner Valley in 1993 to be closer to the Turner Valley Golf Club. Ron was an avid player and spent many summer months on the course and had played and won in several tournaments. Ron and Deanna loved to travel to California and their favourite spot was in La Jolla. Ron and Deanna eventually bought a mobile home in Hemet California and spent many winters enjoying golf and visiting with friends. After Deanna’s passing in 2012 Ron found his way to the Okotoks Senior Club where he met Lyn. Ron and Lyn were active in the Okotoks Senior Club and Ron still enjoyed golf. Ron and Lyn enjoyed four short years together full of fun and companionship.

A celebration of life service will be held at the Foothills Centennial Centre – Smith Room, 4 – 204 Community Way, Okotoks, AB on Thursday, October 31st, 2019 at 3:00 pm. Pastor Julia Kimmett will be officiating. Family and friends are invited for refreshments and to further remember Ron immediately following the service at the Centennial Centre.

Special thanks to the staff, Doctors and Nurses at the Palliative Care in the Black Diamond Oilfields Hospital, who took special care of Ron in his last days. In lieu of flowers, donations may be made to either the Tom Baker Cancer Centre 1331 - 29 Street NW, Calgary, Alberta T2N 4N2 or the Sheep River Health Trust 403 – 995- 5400. To express condolences please visit www.choicememorial.com. Arrangements in care of Choice Memorial Cremation & Funeral Services (Calgary) 403-277-7343
Read Less

We encourage you to share your most beloved memories of Ronald "Ron" here, so that the family and other loved ones can always see it. You can upload cherished photographs, or share your favorite stories, and can even comment on those shared by others.

Posted Nov 01, 2019 at 01:07pm
Randy, Richard, Rod and Lynn.
We are so sorry for your loss. Ron will be missed. Ron was a very kind man.
We will miss him on the course. He is now up there with Dad (Doug McNeil) playing golf everyday, and fighting over the squirrel.
We played a game of golf on Oct 25th for Ron. Take care of yourselves.
Love Tim McNeil & Jackie Davis
Comment Share
Share via:
MH

Posted Oct 31, 2019 at 01:00pm
Randy, Richard, Rod and Lynn.
Please accept our most heartfelt condolences on your loss.
Jen and I are saddened beyond words at Ron's passing. He will be in our hearts and minds for years to come. I will miss him sorely when I next tee up the golf ball and will miss his unique perspective on the game he loved so much.
Words expressed by others who knew him come readily to mind. "He was a Gem of a man." "He was reliable as the daybreak." "You always knew where Ron stood. He didn't mince words." "Ron was kindness itself."

Posted Oct 31, 2019 at 12:58am
Randy, Richard, Rod, Lyn and families
May you always cherish many many wonderful and happy memories. Ron will forever be in our hearts.
Ed and Audrey Mantik
Comment Share
Share via:
CP

Posted Oct 30, 2019 at 08:52pm
My condolences to your family on Ron’s passing. Enjoyed many rounds with him, and was always amazed by his one handed chipping. Rest in peace old friend. Clarke Patterson.
Comment Share
Share via:
JM

Posted Oct 28, 2019 at 02:45pm
Randy, Richard, Rod and families, and Lyn.
Our sympathy and caring thoughts are with you in the loss of Ron, dad, grandpa, and partner.
May you always cherish his special memory in your hearts.
On to his next journey.
Always with love,
Darlene and John Martin
Comment Share
Share via: 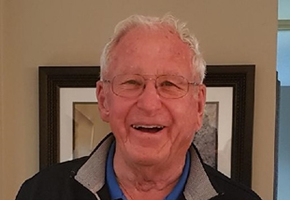