To share your memory on the wall of Ronald Hughes, sign in using one of the following options:

It is with great sadness to announce the passing of Ron Hughes on Friday, July 24, 2020 after a short but courageous battle with cancer. He leaves to mourn his loving wife of 25 years, Laurie; his daughter, Michel... Read More
Hughes, Ronald Campbell

It is with great sadness to announce the passing of Ron Hughes on Friday, July 24, 2020 after a short but courageous battle with cancer. He leaves to mourn his loving wife of 25 years, Laurie; his daughter, Michelle; sons, Dean (Tammy) and Kyle; grandchildren, Sara, Amy (Jay), Katie, Justin and Kingston; in- laws, along with many nieces, nephews and cousins. Ron was predeceased by his parents. Hank and Grace; in-laws, Vivian and Ernie; brother, Irwin and brother-in-law, Dale.

Ron was born and raised in Vulcan, AB. In his high school years, he worked at the Jenkins store as a grocery clerk, a career that would follow him for many years to come, trucking produce to store manager to owning his own produce business. In 1994, Ron and Laurie returned to his hometown of Vulcan where he rekindled old friendships and made many new ones. In 2003 Ron was offered a position as manager at Lake Mcgregor Country Estates just east of Vulcan. He took great pride in this position along with his team, Barry, Terry, and Richard in getting the resort looking great for up coming sales of lots. Ron made many friends here and was always willing to help out, whether it was plowing out a driveway or getting scrap wood for the kids to build a fort.

He was loved very much by his family and friends and we will miss his laughter, his stories, and his mischievous ways.

In his own words, “my life has been a blast and I would not have changed a thing.” 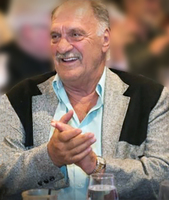