To share your memory on the wall of Ronald Hansen, sign in using one of the following options:

Provide comfort for the family of Ronald Hansen with a meaningful gesture of sympathy.

Ronald Elwood Hansen was born in Melfort, SK on June 19, 1932 to Walter and Isabella Hansen, the youngest of 5. He passed away peacefully, after a short battle with cancer, on Tuesday, May 28, 2019 at Dulcina Hospice in Calgary.

Ron Joined the Royal Canadian Army (Artillery Branch) in 1948 where he served for 25 years. After release from Army in 1973 he moved to Calgary in worked at Colonel Belcher for 8 years and Mail processing plant for 14 years. He enjoyed spending his free time with family, camping and 10 pin bowling. In later years he enjoyed staying home with his dog Kip and cat Monkey.

We would like to thank Dulcina Hospice staff for making Ron’s last few days peaceful and comfortable.

At Ron’s request there will be no funeral. The family will be having a Memorial for Ron. To view and share photos, condolences and stories of Ron, please visit www.choicememorial.com.
Read Less 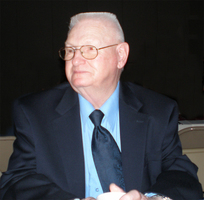