To share your memory on the wall of Ronald Archibald, sign in using one of the following options:

Print
It is with much love and heavy hearts that we announce the passing of Ronald Dennis Archibald on October 22, 2020.

Ron was born in Nova Scotia on September 5th, 1958. His free spirit and independence led him to Calgary, Alberta in the ea... Read More
It is with much love and heavy hearts that we announce the passing of Ronald Dennis Archibald on October 22, 2020.

Ron was born in Nova Scotia on September 5th, 1958. His free spirit and independence led him to Calgary, Alberta in the early 1980s where he met his wife and life partner, Delores.

Ron was hard working and took pride in everything he accomplished. During the early part of his career, Ron worked in logistics and supply-chain management as a supervisor for a distribution centre. His entrepreneurial spirit inspired Ron to start his own company as the owner/operator of a Calgary-based freight services company that provided transportation logistical services throughout southern Alberta and British Columbia. As a skilled trades person in the home building and renovations industry, Ron finished his working career as a successful independent contractor where he supervised multiple teams of trades-people for medium to large construction projects in Alberta.

To say that Ron loved the outdoors would be an understatement. For most summers as his two young boys were growing up, you would find Ron, Delores, Keelan and Liam spending family time together while camping and RV’ing in Alberta and British Columbia. As someone who loved music and playing his guitar, there were many nights of singing, laughter and fun as Ron sang and played music around the family campfires.

Ron loved to spend time fishing along the Bow River with his friend Michael. For many years, the two would go off-the-grid for a few days where they fly-fished the Bow River from dawn to dusk. No electricity. No cell service. No other people. No distractions. That was the level of his passion for the wild and simpler times.

Another way that Ron embraced his love for being outside was through his passion for riding motorcycles. Ron enjoyed the solitude and serenity of solo rides on his classic Honda Gold Wing motorcycle. In later years, you could find him trekking from Calgary to Vancouver Island on his Harley Davidson. Ron loved the freedom and adventure of the open road while driving through the Rocky Mountains.

Ron loved three specific sports: hockey, football and golf. He was a life-long Calgary Flames fan and loved to watch Flames’ hockey games on his big screen TV with his family while wearing his #45 Flames jersey. Ron also enjoyed playing Friday afternoon hockey whenever it did not interfere with his dedication to work or family time.
Most Sundays in the fall were dedicated to following his favourite NFL football team, the San Francisco 49ers. Watching his football team on Sunday afternoons with his friends and family while enjoying some wings and beer; all before a nice Sunday dinner; that’s good living.

Ron combined the love of the outdoors with sports through another one of his pleasures: golf. Ron enjoyed getting together with his close buddies to play a round of golf at the McKenzie Golf Course near his home. He also loved spending family time on the course with his two boys, Keelan and Liam, as it was something that they could enjoy together. Even with two full knee replacements, Ron’s desire for playing golf was only rivalled by his love of spending time with his friends and his two sons.

Wherever he lived, Ron loved staying busy around the house. He was always out in the garage maintaining one of his vehicles or motorcycle, or he was finishing some new home project. He was never idle and loved to work with his hands.

His garage was also a great source of fun and gatherings where he would be listening to music and talking with his boys and their friends.

Ron will always be remembered for being upbeat and positive, even through his 3+ years battle with cancer. He was well known by the medical staff at his treatment centre as being the most inspiring and positive person in their care. Ron would always keep people smiling no matter his circumstances.

Ron was a loving husband, father, and grandfather. He cherished every moment that he could with family and friends.

Ron is survived through his wife, Delores Archibald (nee Clarke); his eldest son, Keelan; his younger son, Liam; his daughter, Carrie; his mother, Sylvia; his sister, Donna; his three brothers, Tom, Doug and Christopher; and his two granddaughters, Hailey and Ava. Ron is also loved and remembered by many relatives, close friends and their families.

The family will have their own private remembrance. During these unprecedented times of non-gathering and non-travel, the family asks everyone who knew Ron to hold a moment of remembrance for him in your own way.

Posted Oct 28, 2020 at 12:47pm
Please accept my condolences, The world is less of a place with out Ronnie, He will always live on in my heart and memories and was a true friend.

3 trees were planted in the memory of Ronald Archibald

Posted Nov 23, 2020 at 06:45am
To Ronnie's family, I was sad to read of your loss. I was in his class in grade 2 when I moved to Sackville, NS. He was a very nice boy. I was delighted when we moved to Beaver Bank, and they moved, too - around the corner. So, we continued elementary school together. I think of those boys when driving past the road on which they lived.
Comment Share
Share via:
KP

Posted Nov 18, 2020 at 03:33pm
Delores, Keelan & Liam. I am SO very sorry for your loss. The Archibald family were great neighbors that became good friends,
I miss you all. There are so many memories ...Ron's beaming smile, big, bright, & white, with those sparkling Blue eyes. I am SO very grateful to have known Ron Archibald & I will miss him dearly.
Comment Share
Share via:
RG

Posted Oct 29, 2020 at 06:05pm
I first met Ronnie when I started dating his youngest brother Chris, or as Ronnie called him, Christopher. From day one Ronnie's love for his family was evident. He had no problem drilling me on my intentionions towards his baby brother. Fast forward 29 years and four kids later, Ron had no problem sharing how proud of us and our family he was. This past summer we spent many days and nights camping at Donna and Chris's with Ronnie and Dee. We had many laughs over Sedrick the mouse, and the 'cricket'. Our daughter Paige does a pretty decent cricket noise. Ronnie was the first to hear this noise in the shed. After turning off the music, calling the cricket and many attempts to locate the so called cricket, he realized that it was Paige pulling everyone's leg. There was so much laughter that evening. Many of Ron's friends from 'way back when' stopped by. Listening Ron and his buddies share their stories was a true gift. A gift to Ron, as his face lit up and he belly laughed over the shenanigans they use to get into, and a gift to all of us to see him so happy. I always appreciated Ronnie's way of doing things exactly the way he wanted. He did things on his terms. His character is one that was and will continue to be inspiring to many. This summer, with his extended stay in NS we were gifted the most precious gift of all, his time, and as hard as it was, he said his goodbyes on his terms, which we will forever be grateful for. He will truly be missed.
Comment Share
Share via:
DW

Posted Oct 29, 2020 at 05:00pm
Dee, Keelan, and Liam, you are in our thoughts and prayers during this difficult time. We were very fortunate and grateful that we got to spend most of the summer with Ron and Dee at our home . We will never forget the card games we had while we had to do our 14 day quarantine, and how much patience Ron had playing cards with us. LOL! Ron will always be remembered as a great friend to me and a great brother in law and the best big bother his sister could have. Chris and Donna Williams
Comment Share
Share via: 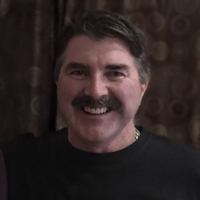 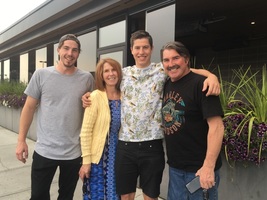 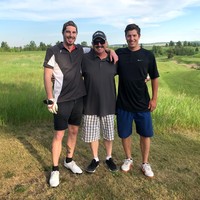 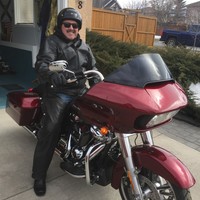