To share your memory on the wall of Robert McLean, sign in using one of the following options:

Provide comfort for the family of Robert McLean with a meaningful gesture of sympathy.

Robert (Bob) McLean, a long-time resident of Calgary passed away on Saturday July 20 aged 94. Bob grew up on the family farm in Champion AB, alongside his five siblings. His father Angus died when Bob was only two leaving his mother Frances (Fanny) to run the farm. It was this resourceful upbringing, work ethic and understanding of the value of money, which instilled in Bob a strong self-reliance, independence, ingenuity and a skillset of how to build and fix anything. He had a career as a customs broker with Union Tractor, R. Angus, Aquitaine and Husky but in his spare time Bob was a master builder.

He engineered and constructed all manner of inventions, including the hand made tent trailer (with hidden drawers and nifty flip top) and the boat launch (with cables, rails and remote control) at his favourite place, ‘The Cabin’ on the Shuswap Lake in BC. The children and grandchildren benefitted from Bob’s kind, generous and patient spirit spending many hours flying around the lake on water skis and tubes and feasting on Bob’s delicious home-made hamburgers.

Bob and his wife, partner and supporter of 71 years Gwen (nee McKeage), were avid square dancers, and round dancers during the winters in Victoria for 20 years, and later in life enjoyed seeing the world via cruising. Bob was respected by all who knew him.

A Memorial Service for Robert will be held at Tower Lounge (4603 Varsity Drive NW, Calgary, AB) on Saturday, August 17 from 1:30 pm - 3:30 pm. Donations may be made in Bob’s memory to a charity of choice if so desired. 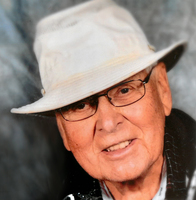