To share your memory on the wall of Robert Bryden, sign in using one of the following options:

Provide comfort for the family of Robert Bryden with a meaningful gesture of sympathy.

Robert (Bob) James Bryden of Calgary went to be with his Lord at the Colonel Belcher Veteran’s Care Center on May 18, 2020 at the age of 94.

Robert (Bob) James Bryden of Calgary went to be with his Lord at the Colonel Belcher Veteran’s Care Center on May 18, 2020 at the age of 94.

Bob was born on July 25, 1925, to John and Margaret Bryden of Mannville Alberta. It was there where he developed his love for horses and his hard work ethic.

Bob served in the Canadian Navy during World War II off the coast of Newfoundland. On discharge, he worked for the Alberta Forestry Service and later attended SAIT studying electronics. He was a member of the Royal Canadian Mounted Police for 30 years, retiring in 1982. After retirement he started a communications company that he ran until 2002.

Over the years, Bob filled his time by volunteering at the Naval Museum, Rotary Club, and the Corvette Club. He was also a member of First Baptist Church in Calgary, The RCMP Veteran’s Association and the Royal Canadian Legion. He enjoyed ‘tapping’ and listening to Morse Code as well as reciting poetry. Bob was an excellent public speaker and was often asked to speak or say grace at events. Some of his many interests included history, cars, opera, the bagpipes, dogs, ships and airplanes. Bob had a way of making people feel at ease upon meeting him. He had an excellent sense of humour and a strong handshake.

Unfortunately due to Government Covid19 restrictions, a church service will not be held but interment will be at Edenbrook Memorial Gardens on May 25, 2020 with friend and Pastor Jim Atkinson officiating. A Celebration of Bob’s Life will be held at a later date once restrictions permit larger gatherings.

Bob’s family would like to thank his many visitors and all of the staff and caregivers of the Colonel Belcher and the Rockyview General Hospital - Units 58 and 59 for their kindness and exceptional care.

In lieu of flowers donations may be made Vets’ Angels at the Colonel Belcher, care of Alberta Health Trust.

Posted Jun 02, 2020 at 03:54am
Sorry for your loss. Bob was in the Colonel Belcher with my dad, Bill Buchanan. I was thrilled to see that my dad had a long time friend in there with him. Both Bob and my dad were both in the Navy and the RCMP. Every time I saw him, while visiting my dad, Bob would ask which one are you Brenda or Bev. I thought that was kinda funny that he remembered our names. Knowing I had never really met him before. I realized that my father and Bob probably had long chats for years about family, etc. Just showed how thoughtful he was.
Brenda Buchanan
Comment Share
Share via:
DT

Posted May 25, 2020 at 11:02pm
Sorry to hear about Bob's passing. He was great guy and a positive influence for me. He (and Edna) were clients for many years. He was one of the most honest and honorable guys I ever knew. I was proud to call him a friend. Condolences to his family.
Comment Share
Share via:
RB

Hi David, Thanks for your kind words, they are appreciated. Sad that so many that knew my Dad couldn't come to his service.
BB

I have met many people in my life. Dammed few I call friend.
I will miss you My Friend.
Ben Bryden
Comment Share
Share via:
RB

Hi Ben, Thanks for your note. Sorry that we couldn't have everyone come and celebrate my dad's life. Maybe in the near future if the government restrictions are relaxed. It would be good to see you.
HS

Flowers were purchased for the family of Robert Bryden. Send Flowers

Posted May 24, 2020 at 11:08pm
Bob was a amazing fellow Rotarian .was a joy working with Bob.
Bob shared many farm stories while living east of Edmonton
Bob you were a great fellow
Cliff Tyminski
Rotary North
Comment Share
Share via:
RB

Thank you for your kind words about my father. Your comments are most appreciated in this difficult time. Rob Bryden 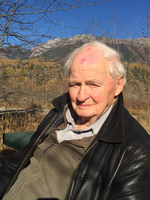 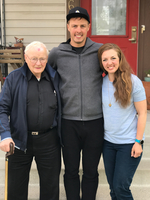