To share your memory on the wall of Richard Kahl, sign in using one of the following options:

Richard was born on July 7, 1931 in Winnipeg Manitoba to David and Julianna Kahl and r... Read More
Richard Kahl - one last shlook

Richard was born on July 7, 1931 in Winnipeg Manitoba to David and Julianna Kahl and received his Engineering degree from the University of Manitoba in 1963. He practiced as a professional Engineer for 36 years throughout western Canada. On September 3rd, 1959 he married Heather Isabell Kahl (Leslie). They raised 2 sons Leslie and Graham.

Richard loved life. A personality too big for some.

He was a mathematician and an artist with a keen sense of design.
He over engineered everything he built - and he built a lot.

A proud Canadian who was always true to himself and always kind to others.
Known to many youngsters who would visit the house as self-proclaimed play-wrestler Herman the German. A great father and a great grandfather to his 4 grandchildren.

A driveway ball hockey goalie and local rink volunteer. His voice and volume would peel paint off the walls of many a hockey arena as he cheered at kid’s games across western Canada and beyond.

Known in the golf world as best player to never break 80.

He loved to party and dance and sing and travel with friends and family, none more than the Scott’s and Bandola’s of Calgary and the Shaw’s of Winnipeg.

He had no time for snobs or hierarchy.

To everyone who has been trying to rip him off over the last 88 years you can stop, you have failed.

And in the year of his passing it could not be more fitting that the Bombers have the Cup.

Details of a Celebration of Life and one last shlook to come.

We encourage you to share your most beloved memories of Richard here, so that the family and other loved ones can always see it. You can upload cherished photographs, or share your favorite stories, and can even comment on those shared by others.

Posted Mar 08, 2020 at 12:03am
Thinking of the Kahl family. I didn't know Richard but he raised a couple of great boys.
Kim McConnell
Comment Share
Share via: 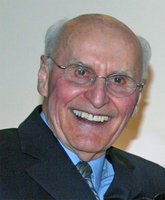