To share your memory on the wall of Peter Slawnych, sign in using one of the following options:

Peter had a strong connection to nature, and for years enjoyed daily walks in Confederation Park, marveling at the wildlife. He left birdseed for the chickadees on the rails of one of the bridges, turning a blind eye to the “do not feed the birds” signs. He lived independently until his 96th year, when he moved to a private assisted-living residence. He slowed down physically but Peter retained his mental sharpness. He remarked that the most difficult part of growing older was losing friends who passed away.

Peter is survived by his sons Michael (Mary) and Taras (Wendy) and grandchildren Joshua, Joel, Fox and Natasha. He leaves behind many cherished friends, extended family members, and acquaintances. Our Labrador Retriever Maggie will also greatly miss him, as she would run towards him anticipating the treat he always kept at hand for her.

Peter passed away after a brief illness. Our sincere thanks to his caregivers at Chartwell Eau Claire, where he resided for the past year.

A private ceremony will be held at this time, with a formal memorial service to occur in the future.

But if the while I think on thee, dear friend,
All losses are restored and sorrows end.
--- William Shakespeare
Read Less

Receive notifications about information and event scheduling for Peter

We encourage you to share your most beloved memories of Peter here, so that the family and other loved ones can always see it. You can upload cherished photographs, or share your favorite stories, and can even comment on those shared by others. 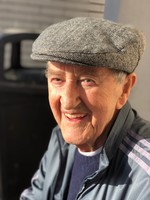