To share your memory on the wall of Peter Pascal, sign in using one of the following options:

Peter was born to Peter and Devere Pascal (nee Sexton) in Lethbridge, Alberta on June 5, 1929. He was raised in Lethbridge attending LCI high school, and subsequently attended St. Pat's College in Ottawa.

Upon returning west, he obtained his welding certification and started his career at Dominion Bridge as a member of the Ironworker's union Local 725. Early on, he worked on many building and plant construction projects in Alberta and B.C. Moving on from his love of welding, he became a construction superintendent for Comstock and helped lead the construction of the Wabamun (Alberta) power plant. He worked as superintendent for Poole Construction, and Project Coordinator and Estimator for Spantec Engineering. Peter completed his career as the Apprenticeship Coordinator for all Alberta Ironworkers, retiring at age 55.

Peter met Marion, the true love of his life, in Lethbridge, where they married in 1953. They rented a variety of apartments and suites after moving to Calgary in 1954, and they ultimately purchased an acreage in Midnapore (just outside of Calgary at that time) in 1959, where they raised all 5 of their children. Peter and Marion designed and built an addition to the existing home, doubling its size, in order accommodate their growing family. After residing at this family home until it completed its purpose, they moved into a bungalow in Lake Bonavista in 1977. It was there that he set up a garage workshop where he designed and created many welded iron and carpentry projects. In 2003, they moved away from the big city to High River, Alberta, where he continued to create amazing workshop items.

Although they physically survived the big flood of 2013, it took it's toll on both of them, and soon after Marion became stricken with a progressive dementia. Peter remained in their home, while attending daily to Marion who needed to reside in a long-term care facility.

In 2017, Marion was transferred to long term care in Calgary, and with Peter still wanting to be close and at her side, he moved into an independent living apartment, in the same facility as Marion. Although he no longer could work on his projects, he spent his remaining time visiting his true love every day.

Peter and Marion loved to travel, and whether by planes, cruise ships, RVs, or automobiles, they enjoyed visiting many locations throughout North America. Their favorites included Hawaii and the South Western U.S.

Peter was a great role model for his family and was self-less and cared for everyone. His neighbors loved his stories and assistance, as he was a "Jack of All Trades" handyman. This gentle, loving, caring, and wonderful man etched a permanent mark on all our hearts and will be dearly missed by all who knew him.

A memorial service for Peter Pascal will be held on Friday Oct. 23rd, at 1:30 pm. Due to Covid-19 restrictions, only immediate family and relatives are able to attend in person.

However, the service can still be viewed live via Zoom for those of you who may be interested attending virtually.

The Zoom meeting invitation is as follows:

In lieu of flowers, donations may be made in Peter’s memory to the Calgary Health Trust.

Receive notifications about information and event scheduling for Peter

We encourage you to share your most beloved memories of Peter here, so that the family and other loved ones can always see it. You can upload cherished photographs, or share your favorite stories, and can even comment on those shared by others.

Posted Oct 05, 2020 at 02:47pm
My heartfelt condolences to the Pascal children and family. May your fond memories bring you comfort, love and laughter. Uncle Peter loved helping others, had a great sense of humour, and enjoyed telling stories about their RV adventures down South. We visited Peter and Marion on several occasions in Yuma, travelled over the border for an afternoon of Margaritas and shopping. Rest In Peace Uncle Peter, you will be missed but your stories will live on forever.

Posted Oct 03, 2020 at 02:48pm
Our condolences to the Pascal Family. We have such great memories of Uncle Peter, and especially all the fun times he and Marion had with Merv and Cec. He will be missed and remembered fondly. Christina n Al Thompson
Comment Share
Share via:
BD

Posted Sep 30, 2020 at 11:26pm
We met Peter and Marion when they moved into our neighbourhood in High River. He always greeted people with the warmest smile and was a joy to talk to. His dedication to Marion in the later years was remarkable. Our condolences go out to his family.
Bob & Dawn Dyck
Comment Share
Share via:
DH

Posted Sep 30, 2020 at 07:36pm
My brother, good friend and my Godfather, Peter. You were always there for your family, for our mom and dad and sisters. You loved us all with your whole heart and we all loved you back. We all have cherished memories, many smiles and tears were shared over the years. You, being so kind, gentle, thoughtful and caring was a great example for me, the youngest in the family, to look up to and work hard to follow. The many times you had to work away from home were hard on you as you always wanted to be home with your family. You worked hard and both you and Marion saved and gave your children a good life and good example. I always cherished our family times together. When I got engaged, you and Marion were SO happy for us. I remember you both teasing Rich and I with your wonderful sense of humour. When we think of you, our hearts melt with love. We are blest to have had you with us all these years. Rest in Peace big brother. Until we meet again..........All our love - forever.
Comment Share
Share via: 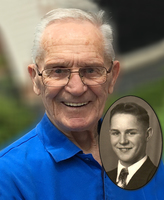