To share your memory on the wall of Patrick Cosgrove, sign in using one of the following options:

Provide comfort for the family of Patrick Cosgrove with a meaningful gesture of sympathy.

Print
Patrick Cosgrove, 86, passed away peacefully in Calgary on May 2, 2020 with his loving wife Catherine (Kit) of 68 years by his side.

Pat is also survived by his children Tom (Helen) of Canton, GA; Tish (Bob) Edmondson of Beiseker, AB; an... Read More
Patrick Cosgrove, 86, passed away peacefully in Calgary on May 2, 2020 with his loving wife Catherine (Kit) of 68 years by his side.

Pat is also survived by his children Tom (Helen) of Canton, GA; Tish (Bob) Edmondson of Beiseker, AB; and Patrick Jr. of Airdrie, AB. His grandchildren Stephen (Jennifer), and Daniel (Misty) Cosgrove of Canton, GA; Derek (Tanya) Cosgrove of Rocky Harbour, NF; KC Edmondson and Kate (Jay) Collins of Beiseker, AB and great grandchildren Gally, Henry, Wylie, Birdie, Jasmine and Launa Cosgrove will all miss him greatly. He left behind his younger sister Madeleine Wilson of Chandler, AZ and his half-sister Dianna (Adrian Watkinson) Beaupré of Canterbury, England, and many nieces and nephews. Pat was pre-deceased by his parents John and Mary Cosgrove, and his younger brother Roger Beaupré.

Pat’s family remember him as a guy who loved his toys. Snowmobiles, cars, trucks, boats, aircraft, 18 wheelers, lawn tractors, and his beloved Chinese tractor that he spent many, many hours rigging up parts to fit.
Pat spent most of his working life in sales of mining equipment for the Caterpillar dealer, and in later years, he owned several Kenworth tractors and drove through Canada and the US, on the road a good deal of the time until he retired. He was always a hard worker who instilled a strong work ethic in his children, and he also believed in having fun. His favorite pastime in life was driving.

Pat and Kit moved from Montreal to Sept-Iles, QC in 1959 and lived there for 14 years before returning to Montreal. Friends from Sept Iles will remember Pat as a director of the Sept Iles Aero Club, where he was a director for many years. He and Kit spent many happy hours there. He was a commercial pilot and a flying instructor, as well as a member of the Yacht Club where he kept his boat.

After returning to Montreal, he joined the Lachine Yacht Club and spent weekends on the boat with family and friends travelling Lake St. Louis to Ste. Anne de Bellevue and Hudson, and vacations on the St. Lawrence Seaway, Lake Champlain and the Rideau Canal. He always said boating was 90% boredom and 10% panic. We have many happy memories of those times of “panic”. He also taught Power Squadron to new boaters and was a member of the Tara Golf Club.

From Montreal, they moved to Waterloo, ON for a few years, then moved to Goldboro, NS.

In Goldboro Pat bought his first sailboat and enjoyed sailing up and down Isaac’s Harbour. Pat and Kit lived in NS for 20 years and made many friends there. Pat was Chairman of the Goldboro Interpretive Centre and became a volunteer fire fighter and a first responder.

In 2015, Pat and Kit moved to Beiseker, AB where he lived until his death. He missed the water but at the age of 85, still driving for pleasure, he bought a 34’ Winnebago motorhome. He spent more hours working on it than camping; there was no job too small for his attention.

Recently, Pat said he had thought over his life and could say that he had done all the things in life he could have wanted, and more. Fine words from a fine man. He will be greatly missed.

Pat has been cremated, and in keeping with his wishes no service will be held at this time.

The family would like to thank the staff at Southwood Hospice Care Centre for their kind care in his final days, as well as the palliative care nurses Katrina and Tanya who gave the family such support. Also, thanks to Dr. Glenn Kraushar from Airdrie, AB, and Dr. Kim Cheema and the nurses at the Kidney Care Clinic in Calgary, AB. No one could have tried harder to help.

For anyone wishing to do so, donations may be made to the Canadian Kidney Foundation.
Read Less

Receive notifications about information and event scheduling for Patrick

We encourage you to share your most beloved memories of Patrick here, so that the family and other loved ones can always see it. You can upload cherished photographs, or share your favorite stories, and can even comment on those shared by others.

Posted May 05, 2020 at 05:40pm
To all the family and especially you Kit, our sincerest heartfelt sympathies to you in your loss. I was so saddened to ❤ get this news today. I will forever think of him fondly as a dear friend, a co-volunteer at the Centre where he spent so many hours on the greater good of our little community. I will always remember when he smiled that great smile....you knew he was pleased with the world. Lean on each other to bring you strength and peace and count on friends should you ever need us. Love Janice and Tom.
Comment Share
Share via: 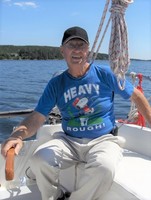