To share your memory on the wall of Murray Nimchuk, sign in using one of the following options:

Provide comfort for the family of Murray Nimchuk with a meaningful gesture of sympathy.

Murray Nimchuk was born in Springfield, MB to Jenny and Peter Nimchuk. He was raised in Hazelridge, MB on the family farm. In his early 20s, he married his wife, Betty Kosk... Read More
Murray Nimchuk
May 6th, 1937 - Friday, August 30th, 2019

Murray Nimchuk was born in Springfield, MB to Jenny and Peter Nimchuk. He was raised in Hazelridge, MB on the family farm. In his early 20s, he married his wife, Betty Koskie. They began their married life in Edmonton, AB, where their oldest daughter Cindy was born. A few years later they moved to Calgary, where their second daughter Audra was born. The family moved to Lethbridge for several years before settling back in Calgary. In their retirement years, Murray and Betty resided in Airdrie.

Family was always important to Murray, and he kept in close contact with his mom, brother, cousins, and other family members. He had a special place in his heart for his son-in-laws Randy (Cindy) and Mark (Audra). Murray felt truly blessed at the arrival of his grandsons, when he became "Gigi" to Ryan and Kevin Morrison.

Murray was a fantastic salesman, and worked for numerous companies in many different fields.

In his day, Murray enjoyed playing baseball and golf. Later TSN kept him busy with armchair supervising and football and hockey games, and golf tournaments. Murray had a talent for playing the guitar, and in his youth was part of a band called "The Western Canadians".

To say the least, Murray was definitely the life of the party! His sense of humour was legendary; he always had a joke or two to share. Murray made numerous friends wherever he went, and everyone always had a good laugh with him.

From the bottom of our souls, we would like to thank every one of you for being part of his journey.

In our hearts he will always stay, loved and remembered every day.

Please share your memories and stories of Murray in the celebration of a life well-lived.

Receive notifications about information and event scheduling for Murray

We encourage you to share your most beloved memories of Murray here, so that the family and other loved ones can always see it. You can upload cherished photographs, or share your favorite stories, and can even comment on those shared by others.

Posted Sep 09, 2019 at 04:53pm
Betty and Family our sincere condolences. Murray had such a sense of humour. He was always the hit of a party getting laughs from all and made everyone feel welcome.

Posted Sep 08, 2019 at 11:07am
My condolences Betty to you and the girls and there families. So many memories to think of when we worked together. Love and Prayers. Jan
Comment Share
Share via:
CK

Posted Sep 08, 2019 at 10:14am
Our sincere condolences to you Betty and your family. While we have lost touch for several years we have always fondly thought of you and Murray - living far away in Airdrie enjoying your retirement! Murray had such a great sense of humor and a sparkle in his eyes. We always laugh when we think of our wedding reception and Murray standing at the mike telling a joke - wholly inappropriate of course - but hilarious! Sending our thoughts and prayers to you all.
Comment Share
Share via:
VV

Posted Sep 07, 2019 at 04:07pm
My condolences to Betty and the entire NImchuk family. I was fortunate enough to deal with Murray through his work for several years.
Murray left a lasting impression on not just me but everyone that knew him in our flooring industry, so much so, that even though Murray had been retired for several years his name would still come up affectionately in many conversations.
In fact, one day before I found out about his passing I was having a conversation with Gary Wutske and we were talking fondly about him.
I like to believe Murray’s great spirit lives on in all the people that he touched.
Murray may be gone, but he will not be forgotten, and will definitely be appreciated for his amazing energy, great sense of humor, and his ability to enliven the people around him.
Vern Verkley

Posted Sep 05, 2019 at 11:06pm
Murray was a wonderful friend and the best brother-in-law. I will miss him. RIP Murray.
Love
Marjorie 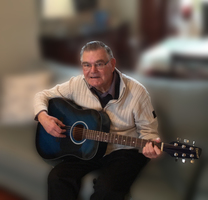