To share your memory on the wall of Maurice Thorne, sign in using one of the following options:

DUE TO THE CURRENT GLOBAL HEALTH SITUATION, THE SERVICE THAT WAS SCHEDULED TO BE HELD ON SATURDAY, MARCH 21 HAS BEEN CANCELLED AND WILL BE SCHEDULED AT A LATER DA... Read More
Thorne, Maurice “Moe” James
October 6, 1946 – February 1, 2020

DUE TO THE CURRENT GLOBAL HEALTH SITUATION, THE SERVICE THAT WAS SCHEDULED TO BE HELD ON SATURDAY, MARCH 21 HAS BEEN CANCELLED AND WILL BE SCHEDULED AT A LATER DATE.

It is with great sadness that the family of Maurice Thorne announces his passing on Saturday, February 1, 2020, at his home in Calgary, AB, at the age of 73.

Moe will be loved and forever remembered by his sisters, Kathy (Ed) and Eileen (Bernie); brother, Phil (Elayne); nieces, Mischelle (Lonnie), Naydene, Rondine, Nichole and Krista and by nephew, Arlond.
He was predeceased by his daughter, Shawn O’toole; his father and mother, Percy and Rose Thorne; his sister, Beverly Tremblay and his nieces, Julia and Robin Thorne.

The family wishes to extend their thanks to Moe’s friend, Ernie and to extended family for all of their support.
Moe had a very successful career in the Canadian Armed Forces. He started his career with the Canadian Guards. He went on to become a paratrooper with the Airborne Regiment, he then remustered to the Royal Canadian Airforce, where he was an Aero Engine Technician in 419 Sqn.

After 21 years, he retired from the Armed Forces. He then went on to work at Electrolux for numerous years and then went to work at the Corps of Commissionaires.

Moe was very highly thought of by family, friends and coworkers. Respect, loyalty and devotion with his continued excellent performance reflect his character and demeanor.

We encourage you to share your most beloved memories of Maurice here, so that the family and other loved ones can always see it. You can upload cherished photographs, or share your favorite stories, and can even comment on those shared by others.

Posted Feb 16, 2020 at 04:10pm
Moe was our neighbor during the time we have lived here for 11 and a half years. I enjoyed going to Costco with Moe the last few years. We sat and chatted had a pop. Moe spoke highly of being in the army and being a paratrooper as Moe knew my brother had been in the army and is now retired. Moe also spoke highly of Marie his love of his life and how much he missed her when she moved away. I enjoyed saying hello from time to time and finding the best deals at Costco with Moe. Love his neighbor Linda
Comment Share
Share via:
EL

Posted Feb 11, 2020 at 11:48am
***Sheila, Jeanette & I are deeply saddened by the recent passing of our close family friend Maurice (Moe) Thorne. All 3 of us looked forward to joining him for coffee at our local Tim Hortons about once weekly. We also were often greeted by Moe when he rang our doorbell and we found him standing there with a big smile on his face, that was always a pleasant surprise for us. on a couple of occasions he phoned & said " lets go to Edmonton Canex to see what they have, there's no Canex in Calgary anymore since the troops moved to Edmonton a fw years back. Another time he was interested in going to Medecine Hat for the same reason. Of course I went along for the ride & conversation. While in Canex he always found a new style military cap or a few new pins to add to those he already had. I will forever miss phoning Moe to remind him the Calgary Flames were playing again tonight to make sure he didn't forget. I don't know if he always watched the games or if he just kept track of the score as I sometimes did. After such a long period of sickness & spending so much time in one hospital after another in Calgary when we thought we were going to loose our dear friend, he bounced back with the help of many wonderful doctors & hospital staff, was living on his own & doing well for over a year. Then true to his way of surprising us he passed away silently in his sleep. Many of us will have a large void in our hearts for a long time because Moe won't be ringing our doorbell, or phoning to go for a Tims on short notice. Our condolences to family & friends. We will do our best to "Soldier On". 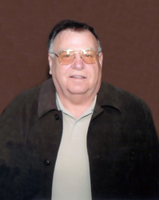 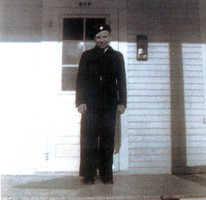 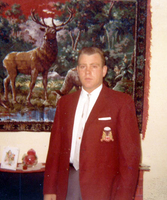