To share your memory on the wall of Marta Mankowski, sign in using one of the following options:

Provide comfort for the family of Marta Mankowski with a meaningful gesture of sympathy.

Marta Mankowski (née Jezierska) of Calgary, Alberta passed away peacefully at Bow View Manor on March 23, 2020 at the age of 99.

Marta Mankowski (née Jezierska) of Calgary, Alberta passed away peacefully at Bow View Manor on March 23, 2020 at the age of 99.

Marta packed a lot of living into her 99 years. She was, among others, a student, scout leader, soldier, executive chef, community worker, a student of theology, daughter, sister, wife, mother, and grandmother.

She will be missed by her daughter, Barbara Gorzkowska (Adam); grandchildren, Mark Gorzkowski and Kasia Gorzkowska-Davis (Chris); great-granddaughters, Paula and Gabriella and family in Poland. She was predeceased by her husband, Tadeusz and her grandson, Michael Gorzkowski.

Our family would like to extend our heartfelt gratitude to the dedicated staff of Beaverbrook unit at Bow View Manor who cared for Mom over the years.

Marta, the youngest of three children, was born on June 19th, 1920 at home on Zakroczymska Street in Warsaw, Poland. Her father was a senior bank executive with a major Polish bank and the family enjoyed a comfortable lifestyle. The stock market crash of 1929 that wiped out the family’s fortune was the first challenge Marta learned to accept and overcome. In her teens she was an honour student, a scout leader and political activist. The summers of 1937 and 1938 were spent leading scouting treks in the Eastern Beskids in present day Ukraine. By the summer of 1939 she had completed her first year in the Faculty of Law at the University of Warsaw and was being encouraged to pursue an academic career.

The outbreak of World War II halted her studies. She joined the underground resistance movement that would later become the Polish Home Army, she completed officer cadet training with the rank of second lieutenant.. When the call to fight in the Warsaw Uprising came she was ready. She was a member of the Chrobry II Battalion where she served as a dispatch runner. Following capitulation, Mom now a POW, was held in three separate camps and forced to work in an armaments factory. In April, 1945 the camp was liberated by the 3rd American Army under the command of General Patton. A short while later, Marta made her way to France, to Lille, to the Polish Military Camp. As the highest ranking female officer, she was made company commander of the female corps. There she met and married her husband Capt. Tadeusz Mankowski who was adjutant to the camp commandant. In 1948 the camp was liquidated and military personnel were transported to England.

For her service she was decorated with the Polish Home Army Medal, The Polish War Medal 1939-1945, The Warsaw Uprising Cross and advanced to the rank of Captain Retired by the Republic of Poland. She was also recognized by the Polish Combatants Association in Canada and the Canadian Polish Congress.

The young couple settled in London and took language classes and Mom had to learn a trade; she chose pastry making and cooking. Post-war England was a challenging place for displaced persons so the decision was made in 1952 to move to Canada, to Calgary. Mom quickly found work as a pastry chef and after a few years opened a european pastry shop; it was ahead of its time and closed after several months. She went back to cooking and worked in some of Calgary’s best private clubs. The young woman who couldn’t boil an egg had become an executive chef. She created the “White Hatter Stew” that in a competition was chosen as Calgary’s official dish over 41 other entries.

Mom served the Polish community in many roles. She was an honorary life member of the Polish Combatants Association Branch 18 and the Polish Canadian Association. In the mid 1960’s she was a member of the Polish Church Building Committee that not only raised funds but lobbied the Diocese to allow the church to be built in northwest Calgary. In 1967 she was asked to chair the organizing committee to celebrate 1000 years of Poland’s Christianity; events were spread over three days. In 1969 she was appointed chair of the reception committee for the Calgary leg of the Canadian visit of Cardinal Karol Wojtyla (Pope John Paul II). Following the death of her husband in 1970, Marta stepped back for a number of years but returned in 1985 as the volunteer manager of the Polish Canadian Cultural Centre. She organized a monthly discussion group, various topics were raised but those dealing with religion were most frequent. Over time, the group morphed into two different entities; a charity and a bible study group. The charity that she helped establish was the Brother Albert Relief Foundation for Poland. She continued to lead the bible study group until the mid 1990’s often making her home available for weekend retreats.

After she retired, Marta completed courses in distress counseling and pastoral care. She worked many shifts, occasional all-nighters, at the Distress Center. She was part of the pastoral team at the Holy Cross and Rockyview Hospitals. Twice a week for several years she would visit the sick and dying bringing them Holy Communion and a cheerful word.

Mom loved hockey games, her garden, her cats, entertaining, reading, researching in depth topics for the bible study, animated discussions about current topics, road trips, going out and about particularly if it included lunch, good food with a glass of good wine and watching her great grandchildren grow. Her declining physical and mental health, loss of mobility and sight forced her to move from her beloved home where she had lived for 55 years to Bow View Manor. She bore her infirmity with grace and stoicism. She will be missed.

Receive notifications about information and event scheduling for Marta

We encourage you to share your most beloved memories of Marta here, so that the family and other loved ones can always see it. You can upload cherished photographs, or share your favorite stories, and can even comment on those shared by others.

Posted Apr 08, 2020 at 10:58am
Dear Barbara, your parents were such wonderful, accomplished people. We were so fortunate to have them living across the
street from us. Their beautiful yard was always on view out our living room window. We watched the cotoneaster hedge, always
perfectly trimmed, and the beautiful trees change colour with the seasons. You were their adorable little girl. My young son, Stuart, especially liked to visit with ‘Mr. Mankowski’. They were good friends. Lovely memories.

Barbara, I remember many many hours spent at your house, I think it was my second home in those days. Your mom and dad were always welcoming and made me feel at home. I think of you often and am so sorry for the loss of your mom. You and your family are in my thoughts and prayers Terri (Tanner) Nitschmann 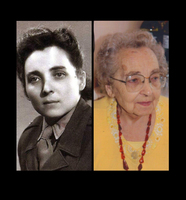