To share your memory on the wall of Marjorie Weber, sign in using one of the following options:

Provide comfort for the family of Marjorie Weber with a meaningful gesture of sympathy.

Marge passed away peacefully on Sunday, August 4, 2019 in Calgary at the age of 90 with her family close by. She was born and raised in Vulcan and spent the majority of her life there.

Marge was a member of the Rebekah Lodge for over 50 years and shared this special part of her life with her mother, Uretta. She was awarded the Decoration of Chivalry for her service with the Rebekahs. Her love of quilting inspired her to join the Kirkaldy Quilters Club and the family greatly appreciates and cherishes the beautiful creations received. She was an active member of the Vulcan and District Historical Society. Her interest in history started with the group that published the first Wheat Country-a History of Vulcan and District and then continued with her involvement in the Archives Committee. She made significant contributions to the creation of the Historical School Site signs, the No. 2 FIS British Commonwealth Training Plan Monument to commemorate the WWII Training School at the Vulcan Airport, and to the design and installation of the Historical Street Signs that were unveiled for the Vulcan 100th anniversary. She was also an avid cribbage player and enjoyed the many hours spent with friends at both the Vulcan and Champion Seniors’ Centres.
She spent her career life of over 30 years with the Vulcan County filling many positions and taking on increased responsibilities in the administration office. During this time she was also very proud to have attained the designation of Professional Administrator with the Institute of Chartered Secretaries and Administrators.

In lieu of flowers, donations can be made to a charity of your choice in her memory.

As per her wishes no funeral service will be held. To view and share photos, condolences and stories of Marge, please visit www.choicememorial.com.
Read Less

We encourage you to share your most beloved memories of Marjorie here, so that the family and other loved ones can always see it. You can upload cherished photographs, or share your favorite stories, and can even comment on those shared by others.

Posted Sep 08, 2019 at 02:40pm
Dear Barb and Karen. I just found out that your mom had passed away. Please accept our condolences and know that our thoughts are with you. I have so many fond memories of your mom growing up. She was an intelligent, active and kind person who did so much for everyone. I enjoyed lively conversations with her and remember her as a hard worker who put so much into civil affairs. She and mom will be reunited and they are probably comparing craft patterns and sharing a story or two.
Our best to you and your families.
Margaret and Darrell.

Posted Aug 10, 2019 at 12:25pm
Barb, Karen and family, my condolences to you. Your Mom was a very special lady. I remember her walking to work at the County Office and she always had a smile. She was a wonderful lady and it is great honour to have known her. She will truly be missed by all of her family and friends. 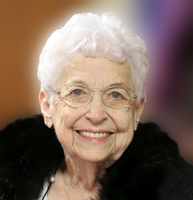