To share your memory on the wall of Ludvik Kovacic, sign in using one of the following options:

Provide comfort for the family of Ludvik Kovacic with a meaningful gesture of sympathy.

It is with profound sadness that we announce the passing of Ludvik at the age of 91.

It is with profound sadness that we announce the passing of Ludvik at the age of 91.

Born in Grobonos’ Slovenia, Ludvik was the youngest of 12 children. He had 5 brothers and 6 sisters. They are all predeceased. His only known surviving relative is cousin Pepek (Stefka) from White Rock, B.C. and a niece in Austria – Marica (Francek).

Ludvik immigrated to Canada in 1953 to Sydney, Nova Scotia. He completed cooking school and worked for over 40 years as a chef in the local hospital until his retirement. He loved to travel. Every year he would make an annual cross country drive from the Atlantic to the Pacific to see his cousin in BC. He always made time to stop and visit the Thorne’s (Lloyd and Stanis (Stanka) in Calgary. His bigger trips included going back to his native Slovenia many times over his lifetime.

As he aged and health started to decline, he moved to Alberta to live with Stanis Robic. She was his closest friend and caregiver for many years until she was unable keep up to his increasing medical needs. It was an extremely tough decision, but eventually Ludvik moved into Seton Age Care. He loved the staff there and they loved him in return. It was unfortunate his hearing and Alzheimer’s prevented him from being more social.

His love for Slovenian food never stopped, hence why he was so appreciative of Stanis. Up until his last year Ludvik still attempted to attend church every Sunday.

Having never married, nor any children of his own, he absolutely loved Stanis’s kids (Mark and Lee Anne) and in time their kids (Kaleb and Devon). He was known to everyone as Uncle Luki.

Ludvik was a very good and simple man. In his memory, please say a prayer and he will rest in peace. He will be forever missed by his ‘family’ the Thorne’s, and friend forever Stanis.

We encourage you to share your most beloved memories of Ludvik here, so that the family and other loved ones can always see it. You can upload cherished photographs, or share your favorite stories, and can even comment on those shared by others. 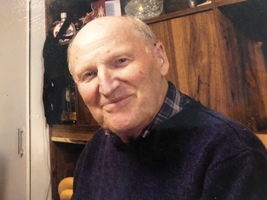 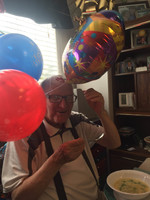 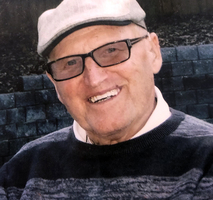