To share your memory on the wall of Logan Sebesteny, sign in using one of the following options:

Provide comfort for the family of Logan Sebesteny with a meaningful gesture of sympathy.

Logan passed away peacefully with his loving family by his side on July 7, 2019 at the Peter Lougheed Centre.

Logan passed away peacefully with his loving family by his side on July 7, 2019 at the Peter Lougheed Centre.

Logan endured a lifelong battle with a very rare condition called Job's Syndrome. Though his life involved many hospitalizations and surgeries, which resulted finally in his inability to work anymore, Logan lived life to the fullest. As a child, he played hockey and mountain biked. As an adult, he was a real estate agent and later opened an auto detail shop in Airdrie. His business flourished and he made many new friends. Due to poor health, he was unable to continue with the shop, so he began to buy and sell used vehicles. Despite all of the pain and issues that he had, Logan could always turn things around, find something else that he was able to do and move on to his next adventure.

He had the kind of personality that people were attracted to. Logan had a special way of relating to people and a kindness, caring and desire to help others. He made friends wherever he went. Logan had a great sense of humor and the ability to take a difficult situation and find some way of making light of it. He was a very wise and intuitive young man.

Logan's greatest loves were Cindy, who was always by his side, his cars and his cats.
Logan loved to go off-roading with his friends, especially Chris Raymond, his best friend.

Throughout the years, Logan had many cars and vehicles. His first love was a 1974 Chevy Nova, which his great aunt sold him for a dollar when he was 15. He cherished that Nova and his dream was to restore it. Due to his poor health, he was not able to do that.

Logan is survived by his loving and devoted wife, Cindy Baird, his parents Les and Lorna Sebesteny and his brother Drew Sebesteny.

There will be a celebration of Logan's life on Sunday, August 18 at Logan's parents' home in Cochrane, from 11:00 a.m. to 3:00 p.m. We would like to invite anyone interested, to meet at Crowfoot in Calgary for a car cruise in honor of Logan. The cruise will begin in Crowfoot parking lot at 11:00 a.m. and travel on Highway 1A to Cochrane for a barbecue and time to share stories about Logan at an open mic. Story sharing will be around 1:00 p.m. We encourage people to tell any Logan stories or share pictures at that time. We would also be pleased to take donations for the restoration of the Nova at that time. It holds great sentimental value to the family and we would like to honor Logan by restoring his car and keeping it in the family.

For those of you who do not wish to join the cruise, please feel free to join us at 211 Riverview Green, Cochrane.

We encourage you to share your most beloved memories of Logan here, so that the family and other loved ones can always see it. You can upload cherished photographs, or share your favorite stories, and can even comment on those shared by others.

Posted Jul 25, 2019 at 11:14am
Logan was a loyal customer of ours at Partsource Calgary 17 ave SW, he was always happy and a bit shy. I got to know him as a fellow gear head and we had long conversations about our cars regularly. I bought a flat deck trailer from him back in 2003/2004 and it carried my Camaro for many years. My husband Gord often worked on stuff for Logan and he was fond of Logan. I will always remember his smiling face and friendly demeanor. Even after I left Partsource to pursue other careers we would catch up when at car events. Logan was a sweet soul and he will be forever remembered.
Comment Share
Share via:

Posted Jul 11, 2019 at 11:39pm
My mind has been flooded with memories of Logan. I remember him being the cutest little baby and looking forward to visiting with him and Drew in Regina. I remember being so excited to hear he was moving to Calgary and I enjoyed sleepovers, trips to Husky for Candy, making up pretend TV shows in the basement and being in awe of him. I knew he was sick, I knew he had lots of surgeries and was in the hospital a whole lot, but you would never know it talking to him. He was positive and passionate, athletic and there is no way I would have survived so many family dinners without him and Drew at the kids table with me.
I remember driving in his Corvette and his smile seeing my shock at how fast the car was. I had wished that day him and I could just drive and drive and that we didn't have somewhere to be.
Comment Share
Share via: 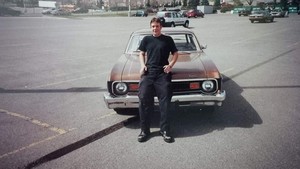