To share your memory on the wall of Kevin Olson, sign in using one of the following options:

It is with sadness and deep sorrow that we announce the sudden passing of Kevin Gaye Olson on Thursday, May 28, 2020.

It is with sadness and deep sorrow that we announce the sudden passing of Kevin Gaye Olson on Thursday, May 28, 2020.

Kevin was so loved, and is dearly missed by his wife Diane, sons Zane (Ashleigh) and Luke (Christina), granddaughter Eleanor, his parents Ron and Delaine Olson, siblings Kelly (Lew), Cameron (Susan), and Brent (Tanya), in-laws Marilyn and Harvey Burke, Steve (Cori), Vicky (Ejvind), and Gary (Beverly), and all of his many nieces and nephews, great nieces and nephews, and extended family and friends. He is deeply missed by all who knew him.

Kevin was born in Saskatoon, SK on April 15, 1958, but soon moved as a toddler along with his parents to Calgary. He spent most of his childhood growing up in Acadia playing many sports with family, cousins, and friends all day long.

Kevin became quarterback of the football team at Lord Beaverbrook High School in grade 10 and 11, and won city championships. He then attended grade 12 at Hillcrest Academy in Fergus Falls, Minnesota, continuing as quarterback. Kevin played numerous sports as a child, many of which he continued to play into adulthood including basketball, hockey and softball, but he particularly loved playing golf especially with his family. Kevin broke 70 a few times, had a double eagle (2 on a 595 yard par 5) and a hole-in-one! Another rare achievement was shooting a “Robin Hood” with his bow, where he shot an arrow into another arrow.

Kevin then met the love of his life Diane, and they married in November 1988. In 1992 Zane arrived, quickly followed by Luke in 1993. Kevin was immensely proud of his two sons, and just recently welcomed their first grand daughter Eleanor born to Luke and Christina on May 11th. Kevin was able to hold and love Ellie shortly before his passing. Kevin chose to be known as FarFar to Ellie, which means Dad’s Dad in Norwegian.

Kevin was an amazing Dad and was cherished by his family. From an early age, Kevin encouraged his boys to be all they were created to be and to follow their passions. The family spent many years camping, going on ‘Olson Family Adventures’ and ‘getting educated’ excursions. Kevin’s favorite “heaven on earth” place was the Livingstone Gap area where he would camp, fish, and hang out with his much loved family. He also enjoyed traveling to Arizona as often as possible, where he enjoyed playing golf with his brothers and ‘exploring’ adventures with Diane. He lived out a dream in 2013, traveling with his dad and brothers to the 2013 Masters. Augusta was his other “heaven on earth”. Another recent highlight was hunting with both Zane and Luke last fall. He then enjoyed many days making deer meat smoked sausage, which he then shared with friends and family.

He loved his camping, hunting, fishing, and golf trips with his boys, brothers, and nephews. Kevin was the ultimate cheerleader, always encouraging others, and his positive attitude extended to all his family and friends. He had a quiet wisdom, and was kind and considerate to everyone. He was strong, confident, respectful, accepting, nonjudgmental of others, foundational, kind, fair, and sensitive.

Kevin followed in his Dad’s footsteps working with him in the exterior renovation business, and later started his own company called Olson Exteriors where he built a reputation of respect, fairness, and quality work. He was a big brother to all he met and gave of himself by caring and finding commonality with others.

Heaven gained an exceptional and special man, and we all lost a hero! Kevin we love you so deeply and we will honor you in all we do, and look forward to meeting you again in our Lord’s presence.

Service arrangements are being planned for Southview Alliance Church in Walden, Calgary. Date and time to be determined at a later date due to the restrictions placed by Covid 19.

Receive notifications about information and event scheduling for Kevin

We encourage you to share your most beloved memories of Kevin here, so that the family and other loved ones can always see it. You can upload cherished photographs, or share your favorite stories, and can even comment on those shared by others.

Posted Jun 21, 2020 at 10:38pm
I am so so sorry to hear about the loss of Kevin, he was a wonderful man with a wonderful family, I just loved babysitting for you guys and have always just loved you both so much as the warm wonderful people that you are! I was shocked and saddened to hear of his loss and have thought of all of you non stop sending prayers your way often. The loss of a husband, father, son and brother is so so hard and I hope you can find some semblance of peace knowing that he is in heaven enjoying the surely epic fishing, golfing, hunting and company of those we have lost before him. Sending you all my prayers and love.
Christine (Roberton) Rachar
Comment Share
Share via:
AK

Posted Jun 16, 2020 at 11:20am
Diane & Family,
We are so sorry for your loss. Kevin was a special man. Heaven's gain, our loss. Praying for peace and strength for you and your family during these sad times.
Arlene & Miles

Posted Jun 15, 2020 at 11:50pm
Dear Diane, Zane, Luke and extended family;
We too are deeply saddened by Kevin's passing. His obituary was so beautifully written, and captured the true essence of the wonderful and talented person he was. We first met Kevin when our twin boys were being cared for at their home back in 1995. It was evident to us early on that Kevin was very welcoming and genuine. It was a privilege to have been among the many people whose lives were touched so positively by his presence. I know he will be missed very dearly by his family and friends. May God's loving and healing spirit embrace you in this difficult time. Our prayers will continue for you all. God's blessings. ~Most sincerely, Diana, Richard, Nathan and Nicholas 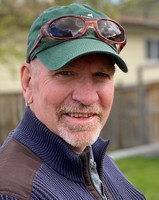