To share your memory on the wall of Katrina (Katie) Medgett, sign in using one of the following options:

Katie Medgett was born in the Ukraine to Dietrich and Katrina Kroeker. Her family emigrated as refugees to Canada and settled in Saskatchewan. She attended Briercrest Bible Institute then went to Normal School in Moose Jaw, Saskatchewan in order to become a teacher.

In 1951, Katie moved to Africa as a missionary with the South Africa General Mission, where she taught school on a mission station called Rusitu, in what was then Southern Rhodesia. Katie met Basil Medgett, who had just finishing training to be a Baptist minister. They were married in 1954 and then immediately moved to Ndola, Northern Rhodesia to pastor the Baptist Church there. Their family grew with the birth of a daughter and son.

Following their time in Ndola, Katie and Basil moved to the Fiwale Hill Mission Station where Basil was the interim, first principal of the Bible College and then Katie and family moved to Lusaka, where Basil was the minister of the Lusaka Baptist Church. In 1967 they moved to Canada, where Basil became the pastor of Argyle Road Baptist Church in Regina, Saskatchewan. This was followed by a move to BC to serve at Olivet Baptist Church in New Westminster and then they moved back to Regina when Basil became the Area Minister for Saskatchewan and Manitoba.

After Basil’s death, Katie turned to a new adventure working in a Bible bookstore in Regina. She happily gave of her time to care for her grandchildren before and after school, enriching their lives with her wisdom, stories and pure love of playing games. She loved singing in the church choir, and rarely ever missed an event at church.

In 2011 Katie moved to Calgary, Alberta to be closer to her two children. As her memory increasingly failed, Katie became less active, but never lost her love for life and positive attitude.

Katie lived a full life and never backed away from any adventure. She loved her God, her family, and life itself, and she will be deeply missed.

If so desired, donations may be made in Katie’s memory to The Canadian Bible Society

Receive notifications about information and event scheduling for Katrina (Katie)

We encourage you to share your most beloved memories of Katrina (Katie) here, so that the family and other loved ones can always see it. You can upload cherished photographs, or share your favorite stories, and can even comment on those shared by others.

Plant a Tree in Memory of Katrina (Katie)
Plant a tree 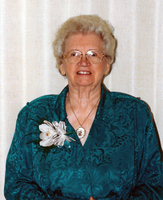