To share your memory on the wall of Judith Holgerson, sign in using one of the following options:

Judy was born in Carnegie, Oklahoma on July 28th, 1944. She grew up in Mountain View, Oklahoma moving to Lawton, Oklahoma as a teenager. While living in Lawton, Judy met her future husband, Gerald who was stationed at a nearby Army base.

Shortly after their marriage the couple moved to Cheyenne, Wyoming where Judy and Gerald farmed and ranched near Gerald’s parents and welcomed two sons and a daughter into their family.

In 1974, Judy immigrated with her family to a farm near Smoky Lake, Alberta, Canada where they first started a dairy farm and later established a small dairy products processing plant in the Town of Smoky Lake.

In 1997 Judy and Gerald returned to the United States settling on a small acreage near Helena, Montana. While living in Montana, Judy worked in a local grocery store and drove long-haul truck with Gerald. After Gerald’s passing, she returned to Alberta in 2009 to be closer to family. From 2009 until her passing, Judy divided her time between Olds and Airdrie, Alberta and worked in a woman’s clothing boutique in Airdrie until her retirement in 2018.

Over the course of her lifetime Judy was a farmer, a businesswoman, entrepreneur and long-haul truck driver. She worked over 15 years in retail both in Montana and Alberta where she made many friends with customers and co-workers alike.

Judy was happiest when she was busy and able to contribute her time and talents to all those around her. She loved to sew and cook, her southern fried chicken was a family favorite. She was chief costume designer for her granddaughter, Jennifer. She was passionate about football and watched every game possible with her son, Ken and grandson, Josh (US college ball and the NFL, the CFL not so much).

With a strong faith and trust in Jesus, she was a vigilant prayer warrior for her children, grandchildren, and great grandchildren.

A Funeral Service was held for Judy on Tuesday, July 21, 2020 at Grace Baptist Church, Airdrie, Alberta.

In lieu of flowers, donations may be made in Judith’s memory to Samaritan’s Purse.
https://www.samaritanspurse.ca/

Please share your memories of Judy at:
https://www.memories.net/page/7213/judy-holgerson?utm_source=copy&utm_medium=skymorial&utm_campaign=skymorials-share
Read Less

Receive notifications about information and event scheduling for Judith

We encourage you to share your most beloved memories of Judith here, so that the family and other loved ones can always see it. You can upload cherished photographs, or share your favorite stories, and can even comment on those shared by others.

Plant a Tree in Memory of Judith
Plant a tree 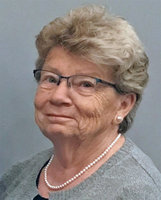