To share your memory on the wall of John Dowling, sign in using one of the following options:

Provide comfort for the family of John Dowling with a meaningful gesture of sympathy.

It is with great sadness that we announce the passing of our dear husband, father and grandfather, John Christopher Dowling of Calgary, Alberta. He passed away on Saturd... Read More
John Dowling
August 5th, 1954 - Saturday, November 16th, 2019

It is with great sadness that we announce the passing of our dear husband, father and grandfather, John Christopher Dowling of Calgary, Alberta. He passed away on Saturday, November 16, 2019 after a courageous battle with Multiple System Atrophy.

John was a devoted family man, and was ever present in the lives of his beloved wife Beverly Ann, his three children Michelle (Matthew) Lakie, Alisha, and Christopher, and three grandchildren Ford, Heathcliff, and Mila. He is also survived by his sisters Maureen (Ross) Ruddick, Sheila (Mark) Gordienko, and Sandy (Phil) Blake. John was pre-deceased by his parents Christopher and Evelyn Dowling.

John grew up in Victoria, British Columbia and graduated from UBC with a Bachelor of Commerce degree. John had a passion for sports, particularly playing squash and being a member of The Jesters, and in the 1970s competed at the national level with Team Canada. John met the love of his life Beverly Ann in 1977, married in 1979, and they embarked on a new journey by moving to Calgary.

John had an entrepreneurial spirit in commercial and residential real estate development. He also mentored his children in the family business. His passion for sports was evident as he always had a game on, especially the Calgary Flames. He loved to travel the world and enjoyed trying new restaurants, good food, and red wines. One of his favorite places was Scottsdale, Arizona where John & Bev spent several winters.

John will especially be remembered for his kindness and generosity to family and friends, and a true gentleman by all who knew him.

Funeral Mass will be held at St. Mary’s Cathedral (18 Ave SW, Calgary, AB) on Friday, December 6, 2019 at 1:00 pm, with reception immediately following in the St. Mary’s Hall. In lieu of flowers, donations may be made in John's memory to Alcove – Addiction Recovery for Women.

Donations are being accepted for: ALCOVE ADDICTION RECOVERY FOR WOMEN SOCIETY.

Posted Dec 02, 2019 at 07:17pm
John and I had many laughs over lunch and coffee through the 90"s and early 2000"s. He always had a smile on his face and a mischievous look in his eyes and we would get the giggles while working on a deal together. John had a great sense of humor and was such a pleasure to work with. We had so many good times, and good laughs. I am sorry to see him go so soon. These memories will always be a gift to remember.
Comment Share
Share via:
MB

Posted Nov 20, 2019 at 03:56pm
Dear Bev, Michelle and family, we feel blessed to have known John as he was a very special man. May the care and love of those around you provide comfort and peace to get you through the days ahead. Our most sincere condolences to the family.

Posted Nov 20, 2019 at 02:52pm
Dear Bev and family, We are deeply saddened by John's passing. Our hearts ache for you. Whenever, we saw John, he was truly a gentleman with obvious Love for his family. His courage and determination in dealing with his serious illness, will always be remembered. Many prayers for peace and Love Always. -Dot & Doug Townsend
Comment Share
Share via: 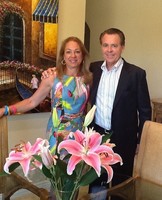