To share your memory on the wall of John Daye, sign in using one of the following options:

John was a very private man. If you wanted to know his cause of death he would have told you it was none of your business! If you asked Faye, his beloved wife of 3... Read More
John William Daye, 77, passed away at his home in Calgary on May 2, 2019.

John was a very private man. If you wanted to know his cause of death he would have told you it was none of your business! If you asked Faye, his beloved wife of 35 years, she would tell you that he had COPD and Congenital Heart Failure. The past few years he struggled with his mobility and wasn’t able to use his golf clubs anymore which gave him much grief.

John was born in Glace Bay, Nova Scotia on January 1, 1942 to Albert and Malena Daye. He lived there with his 2 brothers, Bert and Peter until he was 9 and the family moved to Black Diamond Alberta..

John is survived by his wife, Faye and her daughter Shelley (Marc) Adam. His children, David, Michael and Seanna and their families. His grandchildren lovingly called him Poppa and the Old Fart.
Matthieu (Chelsie) Adam, Nicole Adam (Martino Beretta) and Arianne Adam (Brendan Sillito).
And his greats, Madelynn, Olivia and William Adam.

John is survived by his niece and nephews:
Sheila,Karen, Emily, Scott and Russell along with his sister in-laws, Lisa and Gwen.
He is also survived by his God-daughter
Tara Gechter-Knelsen.

John was a loved member of the McIntyre family.

And last but definitely not least, his 4 legged little girl, his Guardian Angel, Brees.

John entered U of A at the age of 15. At that time he was the youngest to be admitted into the engineering faculty. He transferred to U of A Calgary Campus and took advanced calculus for a fun year. Faye says he would recite Shakespeare, Einstein and Freud and often read the dictionary…sometimes the encyclopedia was wrong! He was a very intelligent man but she says he never figured out how to use plastic wrap!

John loved travel, Gambling in Vegas, Cruising the Caribbean and going on rides at Disney with his Grandchildren.

John was an extreme sports enthusiast and for anyone that knew him, knew it didn’t matter the season because there was ALWAYS a game on. John was a loyal and dedicated fan especially of the Stampeders, the Flames, the Blue Jays and the New Orleans Saints. You can bet he will be yelling at the refs from the sidelines and cheering from the best seats in the house!

John will rejoin his parents and brothers for a proper scotch and a very lively game of bridge.

John loved coaching in his younger years,and in keeping with his love of sports and believing all children should have a chance to play hockey , donations in lieu of flowers can be made to High Country Minor Sports, Black Diamond.

A big Thank you to Foothills Hospital Ward 64, Palliative Staff NW Calgary and Home Care. A special thank you to supportive friends and neighbours and especially to Dr. Michael Forsyth.

The family will have their own time of memorial. At John’s request there will be no funeral service.

“Parting is such sweet sorrow"

Posted May 04, 2019 at 07:21pm
was so sorry to hear of johns passing. he was allways a great friend our hearts go out to the family and he will be missed from garry and delores macdougall
Comment Share
Share via: 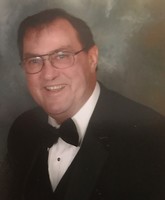