To share your memory on the wall of Joan Lydiard, sign in using one of the following options:

Joanie came into this world on the heels of her twin brother Murray (aka Muzz) and the two welcomed their younger sister, Patricia, a few years later. Raised in Regina Saskatchewan, they pursued an active lifestyle as encouraged by their ultra-athletic parents, Helen and Ted.  As a crew, the Lydiard clan enjoyed the best of the beach life that saw Joanie’s formative years spent on the lake at Saskatchewan Beach. She was immensely proud of her “tough feet” that resulted from enumerable shoeless adventures on the Canadian prairies. These memories left an imprint on her soul, ensuring she would identify as a “Saskie” for the rest of her days.

In her teen years Joanie was introduced to barn life through volunteering at the Regina Riding & Driving Club.  This provided access to her first passion, horses.  The relationships formed at the club forged lifelong friendships, finding mutual respect and joy by devoting countless hours to the animals she loved.

Joanie moved to Calgary in 1975 to pursue a career in bookkeeping and soon thereafter had her only child.  She embraced the role of single mother and was relentless in her efforts to provide for her son. Always willing to sacrifice without complaint, she was the typical hockey mom and never missed a game, event, or occasion.  Joanie brought an abundance of love to her role as a parent and this was a defining characteristic in her life.

She was known for her quirky sense of humour, natural demeanor, and love of people in general. This, and an enviable ability to captivate through story telling had her leaving an impression everywhere she went.

Joanie left this world as she came, behind her recently predeceased brother Muzz (Frances).  She is also reunited with her parents Helen and Ted.  Joanie leaves behind a most grateful son Kelly, sister Patricia, nieces (Susan, Nicole, and Danni), nephews (Doug and Zane) grand nieces & nephews (Nina, Jake, Kai, Georgia, Emilia, Bohdi, & Elliot), and a host of dear friendships cultivated over the years.  Our sincerest thanks go to our family friends Mia and Meg for their loving support throughout Joans final journey.
A celebration of life and dinner will be held at Boundary Ranch , #2 Guinn’s Road, Box 44, Kananaskis, AB on Friday September 11th at 6:00PM.  In lieu of flowers, donations can be made to The Calgary Humane Society .

Receive notifications about information and event scheduling for Joan

Posted Sep 09, 2020 at 12:22am
I met her in 1979, she was joyful, warm and welcoming. We created great memories then and our friendship remained constant. Always funky and fun, she will stay close to my heart forever. 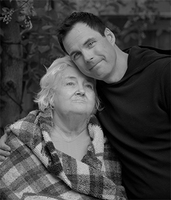