To share your memory on the wall of Jeanne Walker, sign in using one of the following options:

Provide comfort for the family of Jeanne Walker with a meaningful gesture of sympathy.

Jeanne Louise Walker was welcomed into Heaven peacefully on September 01st, 2019 at the age of 89 years. She was a wife, mother, grandmother, great grandmother and friend.

Jeanne was born in Sunny Brae, New Brunswick on August 3rd, 1930 and married Douglas Walker, the love of her life, on August 6th, 1951. Jeanne was the wife of a Naval Officer and travelled extensively, serving with her husband on military bases throughout Canada, the United States and Bermuda.

Jeanne and Doug enjoyed many years of travel during their retirement, spending their winters in Bradenton, Florida and summers in Calgary, Alberta.

Jeanne will be remembered for her devotion to family, friends and her amazing sense of humor.
At Jeanne’s request there will be no funeral service. A memorial will be scheduled at some later date to celebrate her life and that of her husband, Douglas and son Bruce.
Read Less

Receive notifications about information and event scheduling for Jeanne

We encourage you to share your most beloved memories of Jeanne here, so that the family and other loved ones can always see it. You can upload cherished photographs, or share your favorite stories, and can even comment on those shared by others.

Posted Sep 05, 2019 at 06:42pm
Jeannie was always so kind to me when I was young. I have so many fond memories of she and Doug, and hope that now they both are at peace now that they are together again. My love to all of you and I hope that the good memories created over the years will help you transition through this extremely difficult time.
Comment Share
Share via: 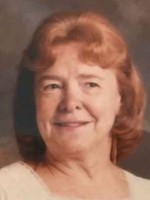