To share your memory on the wall of James Warner, sign in using one of the following options:

Jim blessed the world when he was born on April 14, 1949, in Maple Ridge, BC. He passed suddenly on August 9, 2019, at his residence near Calgary, AB. Jim leaves behind his two beloved children, Maegan O’Neill and Chris Nurse (Lacey Nurse); along with his two granddaughters, Braelyn and Adalee; his sisters, Linda and Verna, and Maegan’s mother, Audrey, with whom he remained a friend. He was pre-deceased by parents, Bryce and Susan Warner (Surrey, BC).

Jim had endless, captivating stories of his younger years, living in different parts of BC, traveling all over on his various motorcycles, winning races, brewing his own beer, playing music with his sister and jamming buddies over the years, and skydiving well into his later years, eventually accumulating over 500 jumps across Canada and the United States. Jim frequently and easily brought a smile to faces. He was famous for his jokes and lighthearted, fun-loving personality. In his early twenties he spent a year living among an Indigenous tribe on Vancouver Island, and was adoringly given the name “Hayshlama” by the Chief of the Village, which meant “Healer of Faces”. Later in his twenties, Jim took up a career in plumbing and pipe-fitting after moving to Alberta. For a time, he also had made a name for himself rebuilding and repairing automatic transmissions as a hobby in Southern Alberta and BC, a skill he learned and mastered without training.

Jim held dear the simple things in life and enjoyed his last 8 years living alongside others on a farm outside of Calgary. He loved taking walks to the river and watching wildlife roam through the fields from his patio with company and a good tune in the background, feet up, and binoculars within reach.

Jim, thank you for sharing your spirit with us for 70 wonderful years. We are deeply saddened with your passing. You will be sorely missed and lovingly remembered in the hearts and minds of all who met you. May you rest in peace.

Receive notifications about information and event scheduling for James

Posted Sep 22, 2019 at 01:01am
Sending the family blessings. I was a roommate of his when he lived in Penbrooke. Met him at AR Wright Plumbing. We had a strange friendship. I enjoyed looking after Maegan who was 5 then. She called me Marwgaret. I loved listening to him play his guitar and sing. I enjoyed motorbike rides on lazy weekends. Blessings dear family, sorry for your loss...
Comment Share
Share via:
D

Posted Aug 20, 2019 at 04:02pm
Jim will be missed by all of the members of his "Dental Family" at Strathcona Dental Works. We were very shocked to learn of his passing, he was such a lovely man. May the fond memories keep him close in your hearts always!
Comment Share
Share via: 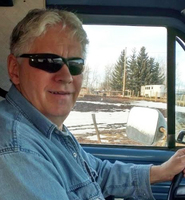