To share your memory on the wall of Irene Machulik, sign in using one of the following options:

Irene Machulik passed away on Wednesday, July 10th, 2019 at the age of 94. Irene was born in a small town in western Poland on March 18, 1925. She lost her mother in early childhood, and a year after her father remarried. Her stepmother was the only mother that Irene remembered. She was very affectionate and full of love to her stepchildren.

Irene was only 14 when WWII started and was traumatized greatly when in the first weeks of the war they lost their family home from a bombing. She called it the years of her lost youth, when every night she and her mother had to sleep in different places to avoid capture and deportation to Germany as slave labourers. After the war, she gained her education and worked as a bookkeeper. In the late 50’s, she met her husband Martin Plonski. She came to Canada on May 19, 1961 to join Martin and they lived happily until his death in 1994. On June 12, 1997, she married Paul Machulik, the old family friend. They travelled through North America and Europe until his death in 1999.

Irene was very special, quiet and distinguished. She spent her last two years living at Bow View Manor. She will be missed by many relatives in Poland.

Receive notifications about information and event scheduling for Irene

We encourage you to share your most beloved memories of Irene here, so that the family and other loved ones can always see it. You can upload cherished photographs, or share your favorite stories, and can even comment on those shared by others. 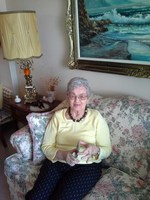