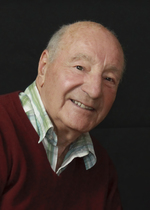 Helmut Bund
May 2, 1931 – November 10, 2020
Helmut passed away peacefully in his home at the age of 89. His health had declined after he suffered his fifth heart attack in August (he had his first one when he was 50), but he still remained alert, tossing out one-liners, political commentary and astute observations. He would often be found in front of his computer flying his virtual airplane around the world visiting wonderous places. Dad was pretty good at it too – crashing only occasionally.

Born in Radkersburg, Austria, Helmut immigrated to Canada in December 1951. He was only 20 years old. After landing in Halifax, one of his two bags was stolen on the wharf – the one with his cameras. Helmut was a third-generation professional photographer. He had worked from a young age in his parents’ photography business in his hometown and apprenticed under his mother, Paula Bund. He studied in Graz, lived in Salzburg and had a masters in photography.

While travelling by train from Halifax to Montreal where he had a photography job waiting for him, Helmut (along with other young men) was taken off the train by the police in Quebec City and directed into an “immigrants’ detention center”. Needing to earn money, he took the only job “offered”. He worked in a logging camp for Brown Corporation in northern Quebec. As costs for food, lodging and tools were deducted from his wages, he received no pay after two months of hard work cutting trees with a hand axe in the dead of winter. He left the logging camp as soon as he could and, with some friends, took a train west, eventually getting off in Calgary.
In October 1952, he was employed by Mackie Studio as a photographer. A document confirming his employment to the immigration authorities states that he “has proved a most reliable employee.” He earned $175.00 per month.

In Calgary, Helmut made friends with others from Austria and elsewhere and was one of the first members of the Austrian Canadian Club. He explored the nearby Rockies at a time when one could drive the narrow gravel roads through the Kananaskis and camp anywhere. He met his beloved Maud McKinley through a common friend, Olga Schneider. He courted Maud by taking her to Sylvan Lake on a motorcycle and they married in 1956. Helmut said he always felt welcomed by her parents and the large extended family who had descended from Scottish immigrants a couple of generations before.

Together, Helmut and Maud built an exceptional life. They acquired Camdale Studios, a photography portrait studio, from their friends Carl Dale and Jack MacDonald. They relocated it to the very edge of Calgary at the time – Britannia Shopping Plaza. People told them that this location would never work as it was too far. They took the risk, worked very hard and Calgary grew out and around them.

Helmut’s professional skill at capturing beautiful portraits soon earned the studio acclaim. To this day, many families have one of his signed photographs hanging in their homes. Maud managed the business side of the studio but also learned how to paint colour on black and white photos. Theirs was a true partnership.

In 1959, their first child, Paula, was born, followed by Sharlene in 1961, Jo-Anne in 1963, and Norbert in 1964. As their family grew, the photography industry started to evolve towards colour film. Helmut and Maud, with four small children at home, took another risk and opened Camdale Photo Color Labs in Altadore. “Be positive. Leave your negatives with us.” was one of their advertising slogans.

Helmut and Maud’s children were their first priority. Despite constantly reminding their children of the importance of saving, the scarcity of money, and the value of finding good deals, they continually enrolled them in piano, hockey, ballet, skiing, German school, cooking, baking and any other type of lesson they asked for, or didn’t ask for…. We went to plays, concerts and operas. We camped, hiked, backpacked, skied, and drove down gravel roads just to see where the roads would take us. We learned how to cook Austrian dishes – gugelhupf, strudel, gulasch and dobos torte.

The family went on a summer holiday every year, leaving the businesses operating in the hands of the employees. Most years, the holiday was camping around the interior of British Columbia, visiting Canada’s beautiful parks and stopping in to visit relatives. We also went to Austria when we were young and met our Oma and other relatives near Helmut’s hometown.

Over the objection of Helmut, but for the “sake of the children”, he allowed us to share our early years with a huge white rabbit, Hop-Along, a cat, Sam, and a standard poodle, Fred, who later became a mainstay at the Lab.

Throughout these years of risk, fear of failure, hard work and persistence, Helmut never lost his love of the mountains, the foothills and the great outdoors. He was at his happiest when he was skiing, hiking or backpacking. Sitting around a small fire, staring up at the stars, high high up in mountains was his idea of heaven. Nobody around. No sound but the wind and occasional chirps of the birds or small critters eating the contents of whatever was in the pockets of the backpack. This was what life was all about for Helmut. This was where he was centered, happy and at peace. He will always be remembered for singing