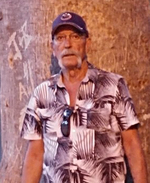 Greg Day passed away peacefully on Tuesday, December 31/19 at the Rockyview Hospital in Calgary, AB. Greg was the first born to Fred & Edith Day on March 17/53 in Toronto, ON. but moved to Prince Albert, SK. as a very young boy where he attended school and graduated High School at PACI high school.

After several different job choices, he decided to attend DeVry to gain his computer programming in computer sciences. Greg graduated in 1989 and had accomplishments in programming such as The City of Calgary Golf Tee Time booking system, Parental security for children with Net Shepherd to name a couple. After several years, he left the programming field whereby he spent his days with his daughter, Melissa through her early years. Greg then went for his Class 1 license to go driving as a long haul truck driver which he continued to do until he retired from in January 2019.

Greg loved spending time with his children and grandchildren which made him feel loved and grateful, he loved spending time with his mom doing crosswords which brought joy and laughter to the both of them, he loved music, sports and especially riding his motorcycle. Greg started to do volunteer work at the Airdrie Food Bank and the Calgary Drop In Center along side Jody which he quite enjoyed. Greg was driven to search out the Truths of what was being said and taught, he urged everyone that he met to search out their own truths and not to accept what they were being told or what they read.

Greg and family built a home in Crossfield, AB. and moved in September 1999 where he enjoyed the small-town living, knowing your neighbors and he never looked back to the big city life.

Greg will be sadly missed by many and left some words to ponder:
"Never once did I ever believe that the regrets of what I didn't do in my life would haunt me more than the regrets that I did do in my life" Greg Day, December 2019.

We love you Greg and always will and until we meet again, Rest in Peace ♥️.

A Celebration of Life will be held at a later date.