To share your memory on the wall of Geraldine Siemers, sign in using one of the following options:

Provide comfort for the family of Geraldine Siemers with a meaningful gesture of sympathy.

With great sadness we wish to announce the passing of Geraldine (Gerry) Siemers on Monday, September 23, 2019 in Medicine Hat, AB where she lost her battle with COPD.

With great sadness we wish to announce the passing of Geraldine (Gerry) Siemers on Monday, September 23, 2019 in Medicine Hat, AB where she lost her battle with COPD.

Gerry is survived by her two sons, Rocky and Russel; her grandson, Darren (Victoria) and great granddaughter, Emree; her sister, Linda (Andy) and brothers, Brian and Edward (Rose). Gerry was predeceased by her father, Colin Boudreau and mother, Mary Landferman, and her sisters, Lorraine, Phyllis and Ellen.

Gerry was born in St. Paul, AB on August 28, 1947. There she met and married Gary Smith and they lived in several towns throughout Alberta where she excelled at hotel and restaurant management. She was known for her excellent café cooking. She often mentioned meeting Dean Martin and Tony Curtis once in the café in Hanna, AB where they complimented her on her excellent steak dinner.

Gerry loved to tell stories about her childhood and her adventures with all her brothers and sisters and her beloved grandparents from the St. Paul and Vilna, AB areas. She used to say that she should write a book about all these stories. And she was a real people person and could strike up a conversation with just about anyone.

After the passing of her first husband, Gerry remarried another man from St. Paul, Walter Siemers. They moved to Pr. George, BC in 1978. And over the next several decades Gerry’s love of children moved her into the daycare and foster care business where she came to have many “adopted” children in her care.

In 2012 after the passing of her second husband, she moved back to her beloved province of Alberta where she spent the last years of her life.
Read Less

We encourage you to share your most beloved memories of Geraldine here, so that the family and other loved ones can always see it. You can upload cherished photographs, or share your favorite stories, and can even comment on those shared by others. 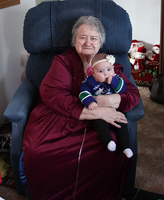