To share your memory on the wall of Gene Mah, sign in using one of the following options:

It is with great sadness that we announce the passing of Gene Fee Mah on Tuesday, December 10, 2019 at Rockyview General Hospital in Calgary, Alberta at the age of 90 years. Gene was born in H... Read More
In Loving Memory of Gene Fee Mah 1929-2019

It is with great sadness that we announce the passing of Gene Fee Mah on Tuesday, December 10, 2019 at Rockyview General Hospital in Calgary, Alberta at the age of 90 years. Gene was born in Hoi Ping, Toi-shan province in China on October 21, 1929 and arrived in Canada in 1956. He didn’t know English but through hard work and perseverance taught himself the language with a few phrasebooks and Chinese-to-English dictionaries. He settled in Lethbridge, Alberta and worked at and later became a co-owner of the Majorette Restaurant from 1958 – 1978. Taking great pride in his work and relationships with his customers, he then started another business called The Mandarin Restaurant, which he ran successfully with his partners until his retirement in 1987.

Upon his retirement, Gene moved to Calgary, Alberta to be closer to his children and their families, all of whom brought him great pride and joy. Gene will be loved and forever missed by his three sons, John (Barb), Donald (Anna) & Erick (Laureen); his seven grandchildren, Sara, Ryan, Julia, Morgan, Jacob, Sofia, & Carter and extended family and friends. Gene loved watching Tiger Woods, the Calgary Flames and the Toronto Raptors. A memorable highlight for him was Toronto winning the NBA championship this year.

He is also survived by his elder brother, Beck Gee, his ex-wife, Donna Chiu and was predeceased by his sisters, Gee Fon Har Mah, Woon Chie Mah, and his younger brother, Genman Ming Mah.

A private family gathering will be held in early 2020 to celebrate Gene’s life. If it is the desire of friends and family, memorial contributions can be made to The Heart and Stroke Foundation in lieu of flowers.

We encourage you to share your most beloved memories of Gene here, so that the family and other loved ones can always see it. You can upload cherished photographs, or share your favorite stories, and can even comment on those shared by others.

Posted Dec 22, 2019 at 03:29pm
Met Gene and his family shortly after moving to Lethbridge in 1968, Had many good times together until he moved to Calgary.
Such a hard worker and so pleasant to all. Visited him in Calgary once and was just thinking about him last week. So sorry to hear of his passing, Warm thoughts to all the family. Luella and Tony Lee.
Comment Share
Share via:

Thank you Tony & Luella. I remember going to each other's houses when we were kids with my mom. My Dad will be forever missed. Hope you are well. Take care, Donald
L

Posted Dec 21, 2019 at 11:10am
My condolences to Gene's family. I remember growing up and coming into Lethbridge and stopping at the Majorette for lunch. In the summer when we would meet one of my Mom's friends there for lunch, Gene would come out from the back and meet us and ask them if they needed a cold milkshake on the hot summer days. Then he would bring out a tall stainless milkshake tumbler from the old milkshake mixers with 2 straws and a tall foamy top. However it was always a cold beer not a milkshake and he always said it was on the house. We haven't had good Chinese Food in Lethbridge since he left the Mandarin. Gene always had great customer service with a warm smile and laugh. May he rest in peace. Linda Egland-Dyck
Comment Share
Share via:
LQ

Posted Dec 21, 2019 at 09:54am
One of my fondest lingering memories from childhood involves eating at the Majorette (and later the Mandarin) whenever the family came to town... Gene was incredibly gracious, and always remembered our names (even later when I became an adult and started going in my own right, he would recognise me) - he usually recounted which members of our larger family (cousins and uncles) had been in over the previous two weeks... when it was close to Christmas, I recall that he brought my father a complimentary cup of "tea"... a life well-lived to have touched the lives of so many people...
Comment Share
Share via:
BC

Posted Dec 21, 2019 at 12:37am
I a so grateful to have known Mr Mah. He was one of my favourite people growing up. When we would go for dinner at the Mandrin, he always knew my name and spoke to me as a young kid as if I was the most important person. His memory inspired me, I was always watching him when he greeted people, he knew everyone, absolutely everyone. He had been a guest at my grandmother and step grandfather's wedding and gave them a beautiful picture one I had admired and was in awe that they knew this fantastic man. Years later as I grew up, I came to work in the restaurant business and I wanted to make our customers feel as special and important as I felt, when I would come into the Mandrin, and everytime someone says wow you remember and know so many people I think of Mr Mah. I can't thank him now but as his family I wanted you to know how a conversation with a little girl influenced my life. I will have a Shirley Temple in his honour, though I doubt I can find the little plastic monkeys to hang off the side! My deepest condolences to your family. Brandi (Watson) Campisi formerly of Picture Butte
Comment Share
Share via: 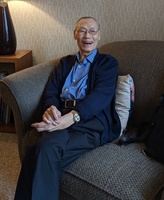 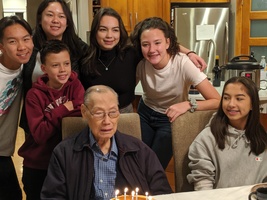 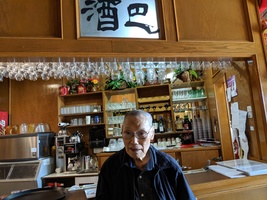