To share your memory on the wall of Fred Johnson, sign in using one of the following options:

Provide comfort for the family of Fred Johnson with a meaningful gesture of sympathy.

It is with great sadness that we announce the passing of Fred Walter Johnson on, April 5, 2020 at the Dulcina Hospice in Calgary, Alberta. Fred was born a second generation Calg... Read More
JOHNSON, FRED WALTER
July 15, 1956 – April 5, 2020

It is with great sadness that we announce the passing of Fred Walter Johnson on, April 5, 2020 at the Dulcina Hospice in Calgary, Alberta. Fred was born a second generation Calgarian on July 15, 1956.
As a husband, father, brother and Papa, Fred cherished spending time with his family. The recent arrival of his granddaughter brought Fred an immense amount of joy. His kind nature and sense of humor will be greatly missed.

Fred loved sports, especially hockey, which he often played with his brothers and friends as a young man. He was a longtime fan of the Calgary Flames and Stampeders, watching their games on TV or in person, whenever the opportunity arose. He spent his free time staying active by playing golf with his wife and son. He was also an avid collector of different items that made him smile; an interest he passed on to his children. A real handyman, Fred was always hands on with repairs and renovations in his own home, as well as helping out his children whenever he could. Fred worked at the City of Calgary and more recently with Canada Post.

Fred is survived by his loving wife Mitzi of 41 years; along with their three children, daughters Jennifer (David), Ashley, son Kent and granddaughter Evelyn. Along with his brothers John (Irene), David (Carolyn), Clyde (Linda), Dennis (Rhonda), numerous nieces and nephews, sister in laws Holly and Peggy. Fred is predeceased by his parents, Edna and David, sisters Cindy and Pat, brothers Andy and Timmy, along with his granddaughter Violet.

Many thanks to Peter Lougheed Centre Unit 39, ICU and the Palliative Care Team, along with the staff at Dulcina Hospice, for all their care and compassion.

In lieu of flowers, Fred's family would appreciate if donations could be made to the Heart & Stroke Foundation in his memory. To view and share photos, condolences and stories of Fred, visit www.choicememorial.com.
Read Less

Receive notifications about information and event scheduling for Fred

We encourage you to share your most beloved memories of Fred here, so that the family and other loved ones can always see it. You can upload cherished photographs, or share your favorite stories, and can even comment on those shared by others.

Posted Apr 17, 2020 at 09:31pm
Once upon a time a very long time ago, in a world that was very different than it is today. There was a group of boys that were destined to meet, the Johnson boys: Fred, John and Andy and the Gross boys: Wayne, Roy and Joe, It was a time when little boys could explore the world that was before them, with no fear, only wonder and daring to face each day with a new challenge. And face each day they did with curiosity and excitement from daylight until dark, using only their imaginations, the only transportation available was their own two feet and no complaining about not having a ride in a car, that was not in their thinking. This is one story I heard about with this motley group of kids. A camping trip was planned by the boys at Prince’s Island, it looked much different back in the 60’s, very natural, no manicuring of grass etc. Also, no parental supervision as kids did everything on their own and were just trusted to come home in one piece. (Imagine that being allowed today) How these boys got a tent there or set it up I don’t know, but they did. I guess my mother took these kids a turkey dinner with two smaller kids in tow in a wagon. I imagine putting up a tent and all that it entails is hard work and the meal must have been eaten up quickly. The boys’ are probably the
only ones that know how they filled their time, but come bed time, I guess it started raining and the kids ended the night sharing their tent with some homeless people, again, imagine that! I heard all were safe and no one in this story was hurt in any way!
This is just one experience of the Johnson/Gross alliance, I know they shared many adventures and experiences throughout their childhood always keeping busy and making their own fun. Without even knowing it these kids formed such precious memories that helped develop them into the adults they became. What a gift, they shared and gave each other, each contributing their own part of their story, their past. Fred’s story is not
over but continues with his wife and partner Mitzi, his children: Ashly, Jennifer and Kent and a granddaughter, Evelyn, and his siblings. How
wonderful to be have shared in Fred’s life, big or small and to be able to take that with each of us. I will always remember your shy smile Fred!
Glenda (one of the Gross sisters’)
Comment Share
Share via:
DJ

Posted Apr 11, 2020 at 12:26pm
Sending our deepest condolences as you go through this sad time. Hoping that all your wonderful memories will soon dry your tears and bring you a smile. Much love, Val & Gary
Comment Share
Share via:
AJ

Posted Apr 11, 2020 at 06:59am
Papa bear would always go see superhero movies with me and I know he would of seen more if he could near the end there like the avenger movies or Spider-Man movies. So like Tony Starks (iron man) daughter said to him, papa bear I love you 3000
Comment Share
Share via:
LG

Posted Apr 10, 2020 at 07:25pm
As a young child I remember my brothers "hanging" with the Johnson boys. It seemed like such a joyous/care free time - through the eyes of the young. I remember games of football and floor hockey and just hanging out. Fred and his family had such wonderful and clear memories of those times. I am so sorry for Mitzi and the family's loss - I know Fred was indeed a "family" man. He gave us such wonderful memories. Extending my deepest sympathies at this time.
Lenore

I am writing this as an observer of snapshots of Fred's life. It started in 1964. Three Johnson brothers, Fred the youngest at 8 years old. Three brothers of my own closely matched in age to them. Six boys, brothers and friends walking down a dusty back alley seeking adventure. I see basement train sets and explosive chemistry experiments. Then came floor hockey, ice hockey and camping. Fred, the electrician wiring the basement of my first home. Weddings, wives and children. You picked a great one Fred. You and Mitzi, perfectly paired. Time ticked on, intermissions followed by social updates, always including reminiscing old times. Pictures proudly circulating of a third generation. Kent broadly smiling and showing us pictures on his phone of Grandpa holding his new Granddaughter. My toast to you Fred, brotherhood, friendship, family and memories for all. Terry Buchan 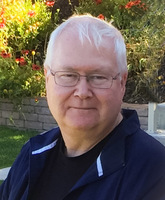 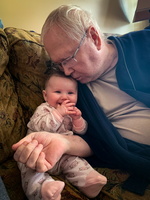 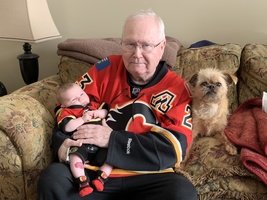 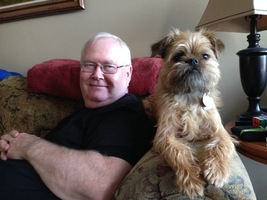