To share your memory on the wall of Frank Hoeldtke, sign in using one of the following options:

Frank Holt was born Frank Juergen Hoeldtke on August 5, 1937, in Stuahm, West Prussia, during tumultuous times in the German Empire. Frank's father was killed on the first day of ... Read More
HOELDTKE, Frank Jurgen
August 5, 1937 - May 5, 2019

Frank Holt was born Frank Juergen Hoeldtke on August 5, 1937, in Stuahm, West Prussia, during tumultuous times in the German Empire. Frank's father was killed on the first day of World War II, forcing Frank, his mother and brother to flee their Russian invaders under cannon fire in the middle of the night. Eventually the family settled in Lubeck, Germany where Frank completed high school, learning English, Latin and French, as well as his native German language.

After high school, Frank attended art college in Hamburg, Germany, where he fell in love with jazz, particularly the music of Louis Armstrong. His love for jazz inspired Frank to learn the trumpet and the cornett and to move to North America, where crisscrossed Canada and the US playing in jazz clubs for the next three years.

As the music business slowed down, Frank met Vince Bruce, a world champion roper who literally taught Frank "the ropes." For the next 20 years, Frank entertained audiences everywhere from Las Vegas, Nevada to the Calgary Stampede, even working with legendary actor (and roper) Keith Carradine.

Frank first sat on a horse when he was 2 years old, and his love for the wild west pervaded his entire life. Frank developed a true love for Native American culture and formed many lifelong friendships with indigenous peoples, including the Blackfoot people living near Calgary, Alberta. Frank produced and directed a documentary of the Blackfoot people called Through the Blackfoot Eyes, for which he won an award granted by the International Film & Television Festival of New York.

As Frank crosses the Great Divide, he wishes to thank all his friends that have passed before him, and those that he leaves behind, for a life well lived. For those that truly knew Frank, they can take solace in the belief he is now at peace in the Great Sand Hills and is revelling in the happy hunting grounds.

A Funeral Service will be held at St. Peter’s Lutheran Church (73 George Fox Trail, Cochrane, AB on Thursday, June 20, 2019 at 11:00 am with visitation one hour prior to service. A reception will follow. To view and share photos, condolences and stories of Frank, please visit www.choicememorial.com.
Read Less

Receive notifications about information and event scheduling for Frank

We encourage you to share your most beloved memories of Frank here, so that the family and other loved ones can always see it. You can upload cherished photographs, or share your favorite stories, and can even comment on those shared by others. 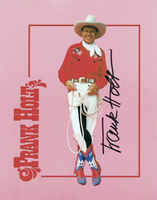